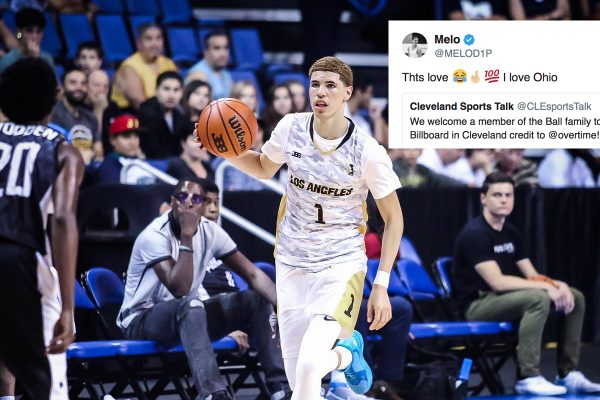 The news that LaMelo Ball will be playing high school basketball in Northeast Ohio quickly resulted in a billboard to welcome him to the area. Ball took note and offered a brief response via social media.

Earlier this week, Ball announced that he will be playing high school basketball at Spire Academy, a prep school in Geneva, Ohio. The school is located less than 50 miles from Cleveland.

The billboard is a takeoff of former Cleveland Cavaliers forward LeBron James’ Nike ad that was prominently featured near Quicken Loans Arena. The company that paid for the billboard, Overtime, is a sports highlight website.

Overtime released an e-mail explaining its reasons for its action:

“Today is LaMelo’s first day in Ohio after announcing earlier this week that he’s enrolling at Spire Academy to finish his senior year of high school.

“LaMelo is famous for his father pulling him out of high school, touring him around Europe to play in his own league, and then suddenly announcing that he’s returning to high school. Overtime has covered LaMelo throughout his career, generating millions of views for videos of him. So we thought it would be pretty epic to celebrate his return to high school with a billboard, playing on another famous Cleveland billboard.

“The billboard is right on I90, by West 3rd Street, just minutes from Quicken Loans Arena.”

Ball’s new head coach at Spire, former NBA player Jermaine Jackson, stated that Ball could potentially be the first player selected in a future NBA draft. Presently, the 1-10 Cavaliers could conceivably be in possession of one of those future top picks, though they’ll definitely be considering other candidates besides Ball.