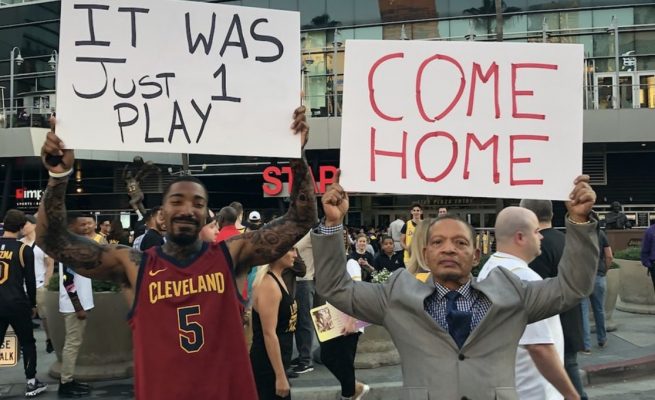 Cleveland Cavaliers guard J.R. Smith and head coach Tyronn Lue were spotted outside Staples Center prior to the Los Angeles Lakers’ game against the Houston Rockets.

Two men resembling Smith and Lue stood outside Staples Center holding a pair of signs that read, “It was just 1 play” and “Come home.” It was a comedic display directed at superstar LeBron James, who left the Cavs for the Lakers over the summer.

The first sign held by the man portraying Smith is in reference to Smith’s infamous blunder in the first game of the 2018 NBA Finals, where he seemingly forgot the score and thus cost the Cavs a potential victory over the Golden State Warriors to start the Finals.

There is some resemblance between the man portraying Smith and Smith himself; the tattoos, goatee, hair style, and jersey certainly add to the aesthetic. However, the man dressed as Lue may be a bit too old to accurately resemble the head coach. Nevertheless, the two have likely brought smiles to many NBA fans as basketball lovers recollect James’ second tenure with the Cavs.