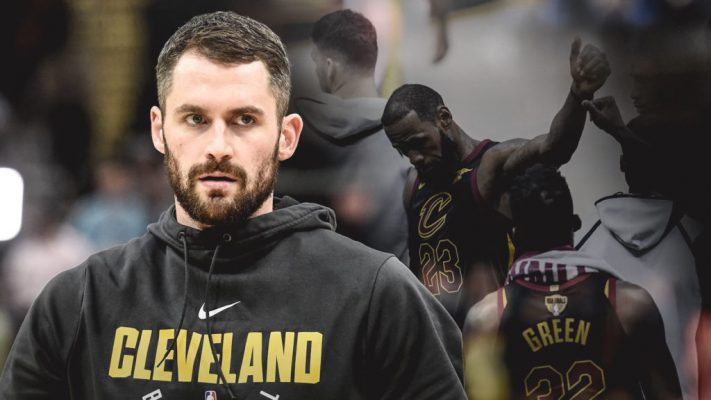 Kevin Love and LeBron James may be on different teams now, but that hasn’t eroded their close friendship. Their four years together on the Cleveland Cavaliers allowed Love to really see what James brings to the table, on a magnified level.

According to Brian Windhorst of ESPN, Love had some advice for those star free agents next summer that are thinking about playing alongside James.

Playing with James over the last four years has been quite the roller-coaster ride for Love. Though he has won a championship ring, been to four straight NBA finals, and signed two $100 million plus contracts, he has also been ridiculed, scrutinized, and has had to make massive adjustments to his game. Sometimes the high level of scrutiny was a blessing, however, as Love’s mental health initiative quickly made national headlines and completely changed his outlook on life.

Love hearkened back to his days playing for the Minnesota Timberwolves, where he feels that he should have been more of a leader. He made many attempts to do so as the team’s franchise player at the time. It didn’t really work out, but at the same time, he never really had anyone to follow.

“It was hard to, that place was a revolving door. We didn’t have veterans, and there was no continuity,” Love said.

“I had some bad habits.”

This may explain why Love struggled to fit in once he arrived in Cleveland and encountered James himself, with his strong and regimented leadership style. In fact, on the Cavs’ first day of practice in 2014, James brought the drills to a brief halt and held a players-only meeting, where he described the role that each Cavs player was expected to play. It was all done while then-head coach David Blatt waited on the practice court for James to dismiss the team himself.

James has somewhat softened his leadership stance since then. But as Love pointed out, any star player that joins a James-led team will have his voice and influenced compromised to a certain extent. This is very important, considering the fact that James’ Los Angeles Lakers are widely expected to go after marquee free agents next summer.

“[Playing with LeBron] you’re not the top guy. I just tried to continue to be myself and not fake it. I said how I felt,” Love said. “Whether we disagreed or agreed, my voice was heard.”

Ultimately, though, Love does recommend that stars seek out an opportunity to play alongside James. Though it brings its fair share of challenges, he believes that the end results make it all worthwhile.

“You have to be resilient. I had a lot of hard nights. There were dark times,” Love said. “But I always believed keep fighting, I was stubborn about it. And LeBron makes sure you have a chance to win every year. He’s gotten a lot of guys rings. You’re going to win at the highest level. We won and we bonded and we’re going to continue this brotherhood.”