Cleveland Cavaliers vs. Toronto Raptors: Rolling at the Right Time 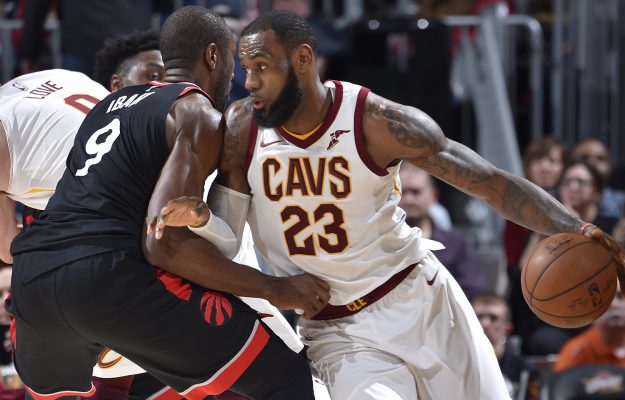 (Cleveland, OH) — Finding a way to combine a 21-4 second-quarter run and shutdown defense for a good portion of the fourth, the Cleveland Cavaliers continued to get ready for the postseason as they defeated the Toronto Raptors by a score of 112-106 at Quicken Loans Arena on Tuesday night. The victory gives the Cavaliers nine wins in their last 10 games and keeps them for the time being as the third seed in the Eastern Conference.

“The way these guys have persevered these last 10 games says a lot about this team’s character,” Cleveland assistant coach Larry Drew said during his postgame conference.

After the first quarter, the Cavs led by four at 28-24, with the Raptors managing to briefly take back the lead at 36-35 with 8:17 left before halftime. That was when the Cavaliers unleashed their 21-4 push that gave them their largest lead of the half at 56-40 at the 3:33 mark. Kevin Love‘s trio of 3-pointers served as the centerpiece of this points explosion, with Rodney Hood adding seven to the cause, though Toronto managed to close the quarter with a 12-4 run to make it 60-52 in Cleveland’s favor at halftime.

“Toronto’s been scoring at a high clip all season,” LeBron James said after the game. “They scored 79 points in the first half against us the last time, so we knew we had to bring the defense from the beginning.”

Following intermission, the Raptors twice managed to cut the margin to five points, the last at 65-60 with 9:45 left in the third quarter. Nine unanswered points by the Cavaliers soon followed, with the Raptors eventually managing to again make it an eight-point game with one period left.

In the opening minutes of that fourth quarter, Toronto had the opportunity to make it a one-possession game, but its turnover was instead converted into a Cleveland basket. The Cavaliers outscored the Raptors 18-11 over the next seven minutes to hold a comfortable 104-90 advantage with 3:20 left. Shutting down the Raptors offense during that stretch was key to the Cavaliers’ ability to pull away, as they held the visitors to just 3-of-14 from the field (21 percent) during that time.

“We wanted to make things tough for them and push them away from the basket,” Jeff Green said.

A furious late rally made it a 108-104 contest with 11.1 seconds left, but four free throws by the Cavaliers helped settle the issue. The Cavaliers had led by 12 at 108-96 with less than a minute to go before three turnovers led to eight quick points by the Raptors.

“It was really unfortunate,” Drew said. “I thought we got a bit complacent. We made bad decisions and we had to bring our starters back.”

All five members of the Cavaliers’ starting lineup scored in double figures, led by James, who picked up a double-double with 27 points and 10 rebounds, while also handing out six assists. Love, who was considered questionable for the game after missing the morning shootaround because of illness, showed no signs of any problems by also collecting a double-double with 18 points and 15 rebounds.

The other three starters were led by veteran point guard Jose Calderon, who scored 11 of his 19 points on the night in the first quarter and also finished with four rebounds and four assists.

“He’s been the consummate pro, a true professional,” Drew said of Calderon. “He’s the kind of guy you love to coach.”

Calderon offered humility in response to his strong performance:

“Sometimes you get more shots and you take what the defense gives you,” Calderon said. “The defense played me differently tonight and I felt comfortable out there.”

Hood tossed in 17 points and Green rounded out the unit by scoring 12 on the evening. While he only scored three points in 14 minutes of action, Kyle Korver returned to the court after missing the last few weeks because of personal tragedy and injury.

“We want to continue building on what we’ve been doing these last few weeks,” James said. “We’re almost healthy.”

The Cavaliers conclude their four-game homestand on Thursday night as they host the Washington Wizards. The game will tip off just after 8 p.m., with the special time due to it being nationally broadcasted on TNT.