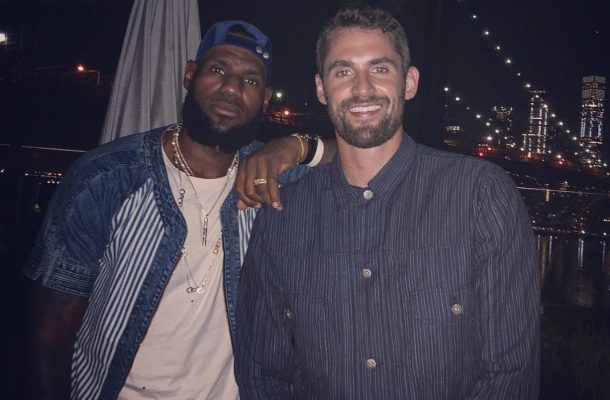 Cleveland Cavaliers power forward Kevin Love celebrates a milestone birthday on Friday when he turns 30 years of age. As he awaits the start of the team’s training camp on Sept. 25, Love took time to acknowledge the moment as well as his continuing friendship with former teammate LeBron James.

Even before the two players became teammates with the Cavaliers in 2014, they had established a bond as members of the 2012 U.S. men’s basketball team, which captured the gold medal at the London Summer Olympics. After James made his decision to return to the Cavs two years later, he indicated his strong interest to team management about acquiring Love from the Minnesota Timberwolves.

That connection helped lead Cleveland to four consecutive appearances in the NBA Finals and included capturing the franchise’s first-ever league title in 2016. One of the lasting images of that memorable moment was a photo that showed Love and James embracing just after the final buzzer in Game 7 had sounded.

James signed to play for the Los Angeles Lakers in July, garnering mountains of media attention about the shift that now severs that on-court connection.

However, Love’s offseason has also been busy from both a professional and personal perspective. In the first case, he signed a four-year extension with the Cavs that will pay him $120 million over that time period beginning next season.

In the latter instance, Love has continued to embrace the concept of creating greater awareness of mental health issues. That push began back in March, when the veteran penned a powerful article in The Player’s Tribune that offered insight into his own struggles with issues like anxiety.