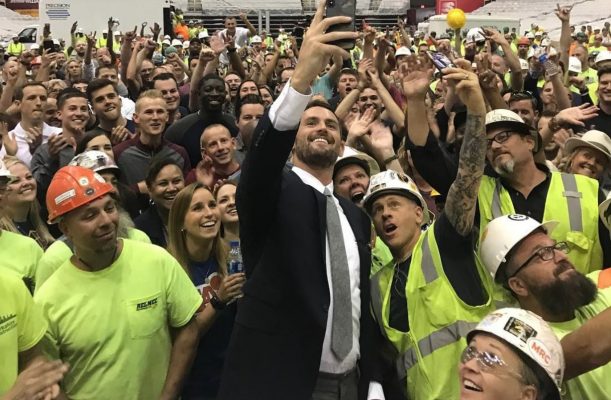 On Tuesday morning it was announced that Kevin Love had signed a four-year, $120 million extension with the Cleveland Cavaliers.

It wasn’t long before the All-Star big man took to social media to celebrate that fantastic news. He did so by posting an epic picture from within Quicken Loans Arena, where he signed his extension.

Cleveland. Thank You. Let’s get it.

Love expanded on his sense of gratitude in the Cavs’ official announcement of the extension.

“When I first came to Cleveland, I came with a long-term mindset,” Love said. “I came here to win. We developed a culture here that reflects that. I’m super excited and I couldn’t be happier. It’s a big commitment for me and it’s a big commitment from the Cavaliers, so I want to thank Dan Gilbert, Koby Altman and the entire organization. I enjoy playing here, I’m excited about the team that we have and look forward to our future together. Cleveland fans have been special from day one and I’m also looking forward to continuing to be a part of this great community.”

With the departure of LeBron James earlier this month, it is clear that the team Love was traded to back in 2014 is a thing of the past. After four seasons of often being the second or third offensive option, Love will look to lead a talented, but inexperienced Cavs team in the 2018-19 season.

Based on his reaction, it seems he couldn’t be more excited for the challenge.