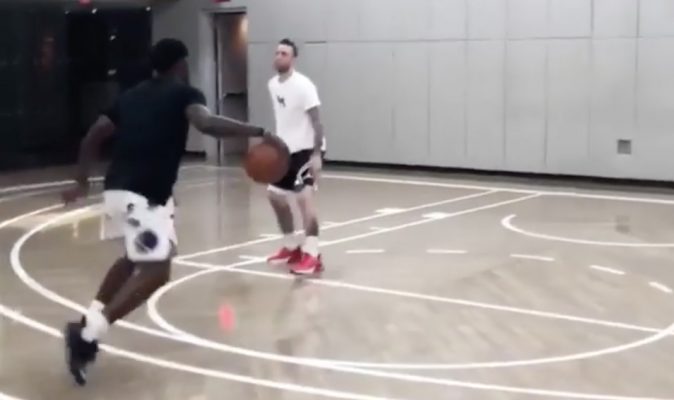 So far this offseason, Cleveland Cavaliers shooting guard J.R. Smith has been the topic of trade rumors and has felt compelled to respond to his haters via social media.

While that kind of activity could have discouraged Smith from preparing for the 2018-19 NBA season, it seems the veteran guard is doing just that.

On Tuesday, Chris Brickley, who was listed as the most sought after NBA trainer by ESPN, took to Instagram to prove that Smith has been grinding hard this offseason.

Last season, Smith averaged 8.3 points, 2.9 rebounds, and 1.8 assists per game. His usage and production increased once the postseason began, but that wasn’t what most fans will remember about Smith’s impact on the Cavs’ playoff run.

What fans will of course remember the most is the massive mistake he made at the end of Game 1 of the NBA Finals, when he failed to put up what would have been an easy game-winning layup at the end of regulation.

As a longtime professional, it is likely that Smith has managed to move on from that embarrassing moment. Still, it would be foolish to assume that he isn’t using the memory of that mistake as a form of motivation to keep him working hard during the offseason slog.

With just under two months until the 2018-19 season begins, fans aren’t too far away from finding out how that hard work is going to impact his game.