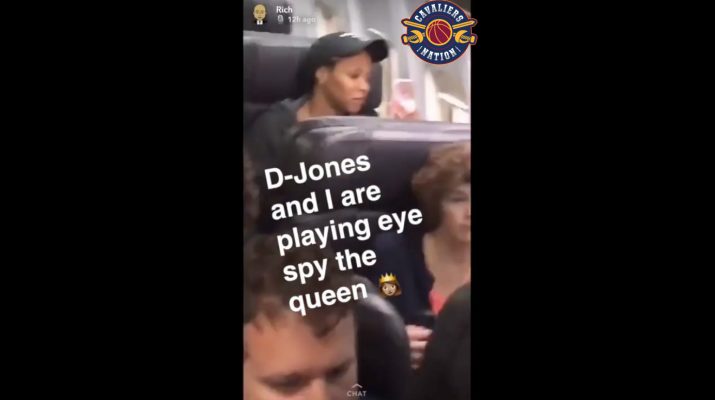 Former Cleveland Cavaliers player Richard Jefferson had fun on social media when he caught Savannah James off guard while on a trip back home. The wife of Cavs superstar LeBron James was the subject of a Jefferson prank where he pretended to be eyeing her during a red-eye flight from Los Angeles to Cleveland.

Jefferson was with former Cavs teammate Dahntay Jones as they had a little bit of fun on the plane with the unsuspecting better half of the 2016 Finals MVP.

“Yo, Tay! Who’s that chick in the front row right there?” Jefferson asks Jones in the video. “She on the back. Is she cute? What’s her name, Tay? I don’t know man, but I’m getting her number, Tay. She doesn’t even see us. I gotta get that chick’s number, man. She got so much swag and everything.”

Eventually, Savannah James saw them and laughed as she recognized her stalkers to be her husband’s ex-teammates.

During a Fox Sports Ohio broadcast of the Eastern Conference Finals, Jefferson later recounted the story of meeting Savannah James on the same flight.

"Whenever she flies it's kind of like Air Force One."

— Richard Jefferson on sitting next to Savannah James on the way to Cleveland ? (via @foxsportsoh) pic.twitter.com/kCJMxX7PXV

“We flew in here together,” Jefferson said about Jones. “We were on the same red-eye. Our flights started boarding at 10:25 out of L.A.”

Later, the two said that they sat next to each other on the plane. That’s when the conversation shifted to their accidental meeting with Mrs. James.

“He wouldn’t stop snoring,” Jefferson said about Jones. “But we also sat next to Savannah James. It was good.”

“We bothered her for a whole flight,” Jones replied.

“But the good news is that we knew that the plane was going to be safe because whenever she flies it’s kind of like Air Force One where they have fighter jets on the side to make sure that she lands in Cleveland safely,” said Jefferson.