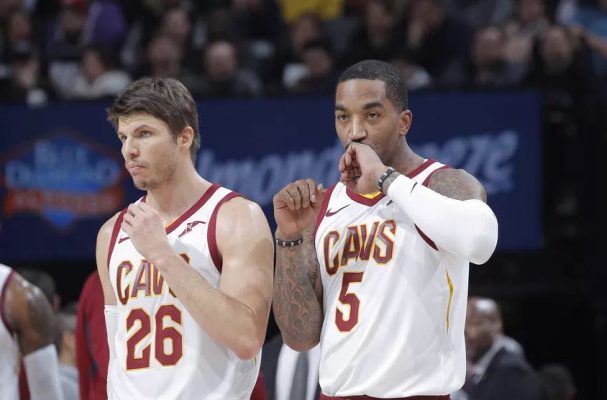 Five weeks into the post-LeBron James era, the Cleveland Cavaliers are continuing to look at ways to revamp their roster as they effectively begin a rebuilding phase. That approach means that Kyle Korver and J.R. Smith continue to be used as trade bait by the team in an effort to reshape the roster.

Given the franchise’s reduced expectations entering the 2018-19 campaign, Korver and Smith are costly commodities that might be able to be exchanged for younger talent for the future.

The Cleveland.com Wine and Gold Talk Podcast that was taped on Friday had Cavs beat reporter Joe Vardon offering his thoughts on a variety of topics. Vardon offered one scenario of a possible deal involving Smith, with Houston Rockets forward Ryan Anderson a key part. He also noted the team’s expectations is possibly trading away Korver:

“The Rockets could create a trade exception to cover most of the difference (in salary). So that, you know, if the Cavs and Rockets really wanted to work this out, where they (Cavaliers) took Ryan Anderson, they could do it. But, I just don’t think they’re serious with that yet, and again, the thing will be the Cavs will want a first round pick for any deal that involves Korver. I mention Korver, because if you trade J.R. and Korver to the Rockets for Anderson, the salaries work.”

Both players represent a luxury that doesn’t equate with the current state of the franchise. During the James era of the past four years, blowing a hole in the team’s payroll was an accepted aspect of helping the team win four consecutive Eastern Conference titles. That’s no longer the case.

Korver became a member of the Cavs in January 2017 following a trade from the Atlanta Hawks, while Smith had come along with the departed Iman Shumpert in a January 2015 deal with the New York Knicks.