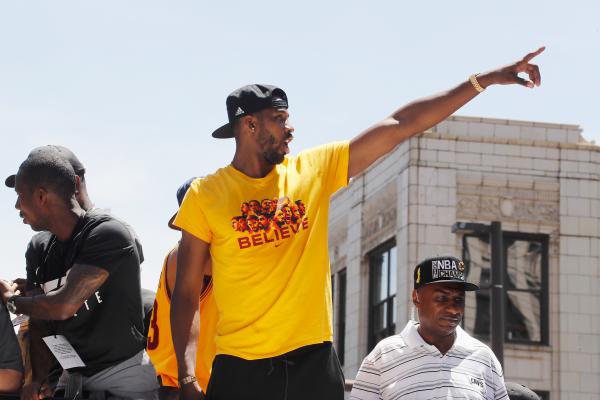 News broke on Tuesday of Cleveland Cavaliers center Tristan Thompson getting the better of Golden State Warriors forward Draymond Green during a brief scuffle at a Los Angeles nightclub on July 18. While former Cavs forward LeBron James was disgusted by the behavior, it appears that some of the team’s fans are ready to reward the seven-year veteran for delivering a punch to Green.

The announcement of the event came from Facebook user Connor McKenney on Tuesday night. In less than a day, more than 3,800 people have indicated that they plan to go to the event and approximately 14,000 have expressed interest.

The celebratory parade is scheduled to take place on Oct. 13, which happens to be during the Cavaliers’ training camp. The event also includes a tinge of consideration about offering donations for charity:

“Parade in Cleveland on October 13th (Tristan’s number) at 3:10 p.m. (For obvious reasons). We would all like to punch Draymond in the face, so we need to celebrate someone who (probably) did! Bring canned goods I guess. Go Cavs.”

The animosity toward Green actually extends far beyond the borders of Cleveland, with much of the NBA having less-than-positive things to say about his antics. Yet the fact that Green has been an aggravating presence on the team that the Cavaliers have faced in each of the past four seasons raises his presence among Cavs fans to a much higher status.

In reality, Cavs fans should hold a special place in their hearts for Green. That’s because his actions during the 2016 NBA Finals lit the fuse for the Cavaliers to make their historic comeback from a 3-1 deficit in the series. Provoked into punching at the groin of James in Game 4, Green was suspended for the following contest. By the time the series ended, Cleveland had its first major sports title in 52 years.