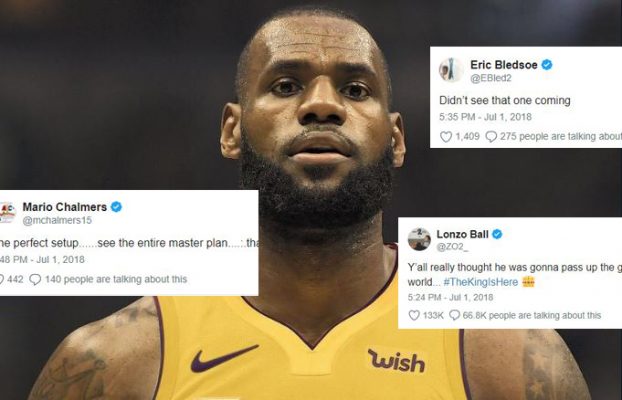 NBA fans didn’t have to wait long to find out where LeBron James would sign as a free agent, as the four-time NBA MVP announced that he will continue his career with the Los Angeles Lakers.

While the writing on the wall regarding James’ intent to play with the Lakers had been there for quite some time, that didn’t keep NBA Twitter from exploding over the news that will change the entire landscape of the NBA for the foreseeable future.

Players all over the league shared their thoughts on the massive news, including some of his new teammates.

Y’all really thought he was gonna pass up the greatest city in the world… #TheKingIsHere ?

Players in the already stacked Western Conference also reacted to the news that the King has arrived.

Others just took in the news with a mixture of shock and excitement.

Wake up from a nap to see y’all going crazy. Bout time lol

Didn’t see that one coming

Lol bron just joined the Cavs of the West ???

At least one fellow NBA player looked deep into the future to share one aspect of James’ new four-year contract.

Bron gonna be a free agent just in time to play with his son . That’s a bar ✊?

While this is certainly a tough day for Cleveland Cavaliers fans everywhere, it is hard not to enjoy seeing just how much James’ decision can rock the entire league to its core.

Whatever happens from here on out, James and Cavs fans everywhere will have an unbreakable bond that was forged with his two stints in Cleveland. Only time will tell if a third James era in Cleveland will come to pass the next time he becomes a free agent.