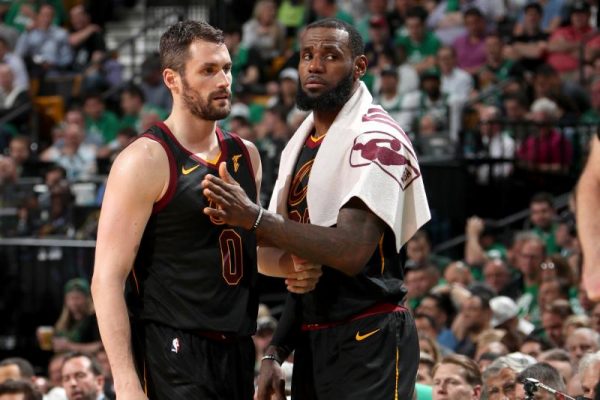 The uncertain status of LeBron James, who will be entering the free agent market again in a few weeks, has put the futures of many Cleveland Cavaliers players in doubt. That group includes forward Kevin Love, who indicated that he wants to continue playing for the Cavaliers with James.

Love spoke on Saturday about rumors that he would be traded away if James leaves to play for another team:

“People have been saying that for the past four years,” Love said, per Matthew Florjancic of WKYC. “I knew that question would come, but I like to be here. I’ve always said that. Always wanted to win here.”

Having played the past four seasons with James, Love would like that connection to continue, even if he has no say in the final decision:

“Obviously, I’d love to play with LeBron the rest of my career,” Love added, “but that will be a choice that he makes.”

Four years ago, James returned to Cleveland after playing four years for the Miami Heat, and indicated to Cavaliers management that he wanted them to acquire Love. That took place in August 2014, with the Cavs then reaching the finals in each of the next four seasons and winning the 2016 NBA championship.

James won’t make his decision until next month, with the fate of the franchise hanging in the balance until that time occurs. The situation is a reversal of fortune from three years ago, when Love was a free agent. James and Love spoke at the time, with eventually re-signing with the Cavs, a scenario the team’s management players and fans are hoping takes place again with James.