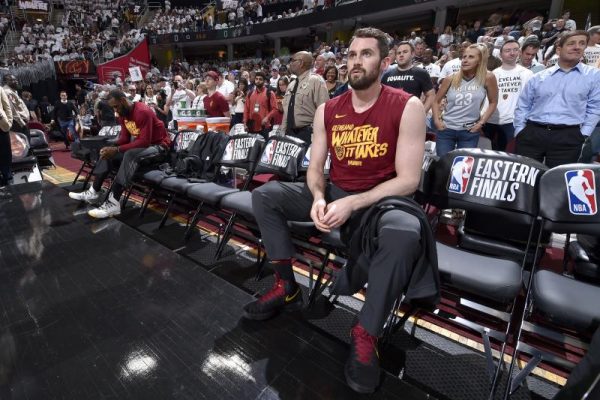 The Cleveland Cavaliers had feared that their team might’ve been without All-Star forward Kevin Love for Game 2 of the NBA Finals following his involvement in a late-game scuffle between Tristan Thompson and Golden State Warriors star Draymond Green.

Love was not in the game at the time of the incident, but was seen on the court as Green and Thompson got tangled up. Because of that, many wondered if Love would receive punishment in the form of a suspension for Game 2.

On Friday afternoon, the NBA finally released its ruling on the incident, announcing that Love will not be suspended for his actions.

The NBA will not suspend @KevinLove for leaving the bench area in the closing seconds of Game 1, league source tells @YahooSportsNBA.

Not suspending Love seems like the right call. As one NBA analyst pointed out, it appeared Love had left the bench to argue the call on Thompson rather than get involved in the tussle. Once it did break out, Love promptly headed back to the bench.

Kevin Love told me he left the bench in OT to argue the call on Tristan, walking onto the court to get in the officials' eyeline, not in reaction to any scuffle & before it even broke out. Video (via @bballbreakdown) seems to back this up; not sure if it will matter to the league pic.twitter.com/JeHmd6Fl2p

This is great news for the Cavs. If Love had been ruled out for Game 2, it would have not only reduced the number of weapons at their disposal, but it would have also had an impact on their already badly hurt morale following their Game 1 meltdown.

With this ruling in the books, Love and the rest of his teammates can look forward to taking the court on Sunday night in an attempt to steal Game 2 and even up the series.