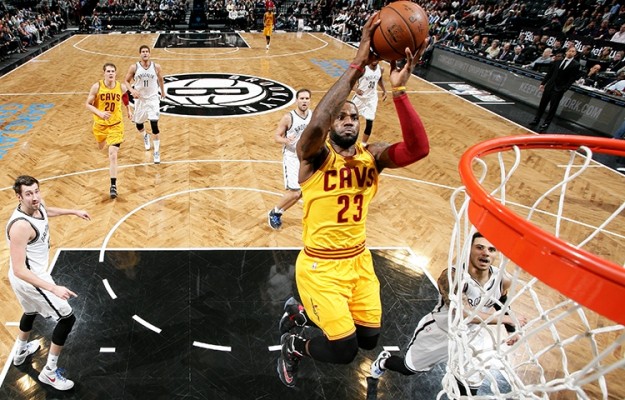 (Brooklyn, NY) – Giving up 14 unanswered points in the final five minutes proved to be fatal for the Cleveland Cavaliers as they dropped a 104-95 decision to the Brooklyn Nets at Barclays Center on Thursday night.

The Cavaliers led 92-90 before Brooklyn began its surge on a basket with 4:42 remaining. That eventually concluded on a Brook Lopez three-point play with 22.7 seconds left that made it 104-92. A meaningless three-pointer by the Cavs accounted for the final score.

Head coach Tyronn Lue talked after the game about the team being flat in the latter half of a back-to-back:

“If we don’t come out and play hard for 48 minutes, things like this are going to happen.”

Connecting on the three-pointer at the end was an ironic final note, given that Cleveland was plagued throughout the evening by their inability to hit long-range attempts. For the game, they made just 10-of-38 from beyond the arc.

LeBron James offered postgame remarks about what went wrong for the Cavaliers:

“We just didn’t make enough plays,” James said. “We had some good looks, but we just didn’t knock them down.”

That dependence on a shot that wasn’t falling, and an overall lack of aggressiveness were key factors in the defeat. In the latter category, the Cavs reached the foul line only nine times on the evening.

Lue spoke about how Brooklyn was able to force so many threes:

“They did a great job of packing the paint and we just didn’t make shots.”

James led all scorers with 30 points, adding six rebounds and five assists. The only other two players to reach double figures were Kyrie Irving with 13 points, five rebounds and four assists, and Kevin Love, who notched a double-double with 11 points and 12 boards.

James contrasted the first and third quarters after the game:

The Cavaliers trailed 26-23 after one quarter, despite connecting on 61 percent of their field-goal attempts, with the main problem being seven turnovers they committed.

In the second period, Cleveland showed a reluctance to move away from the three-pointer, making just 2-of-13 attempts (3-of-18 for the half) and falling behind by as many as 13. That came during a 19-5 run by the Nets over nearly half the quarter, where the Cavs missed 11-of-13 field-goal attempts and Brooklyn held a 55-42 advantage. By intermission, they were only able to chop three points off the deficit to make it a 59-49 score.

“In the third quarter our backs were against the wall and we held them to 21 points,” Lue said. “But we had our starters in then and we didn’t have anything left in the tank in the fourth.”

James led that third-quarter comeback, which included a 28-13 run over the final 9:14 of the period. That run turned a 67-55 Brooklyn lead into a 83-80 Cavalier advantage. James connected for 15 points and gave them their first lead since the previous quarter with a three-point bank shot with just over a minute left in the period.

The Cavaliers will be off tomorrow before moving over to Madison Square Garden to face the New York Knicks in a game set to tip off just after 7:30 p.m. ET.