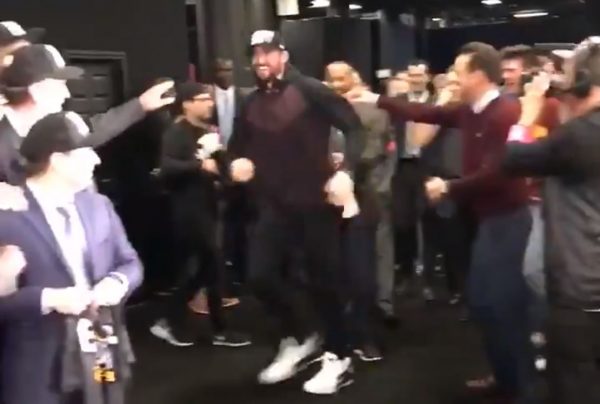 As the Cleveland Cavaliers faced the Boston Celtics in Game 7 of the Eastern Conference Finals, Kevin Love was nowhere to be found on the bench. But after the Cavs eliminated the Celtics to advance to the NBA Finals with an 87-79 victory, Love suddenly appeared out of nowhere during the Cavs’ trophy presentation.

His teammates cheered as Love joined them to celebrate the big win.

Kevin Love showed up to the Cavs trophy presentation to loud cheers from the rest of the team. pic.twitter.com/dPRewLTBsS

Love was placed in the NBA’s concussion protocol after banging heads with Boston’s Jayson Tatum in the early minutes of Game 6. After experiencing concussion-like symptoms on Saturday, the Cavs made him unavailable for the conference finals clincher on Sunday.

Thankfully for Cavaliers fans, the Wine and Gold were able to pull off an improbable win on the road behind the spectacular performance of LeBron James, who nearly had a triple-double with 35 points, 15 rebounds and nine assists. The rest of the Cavs’ supporting cast carried the extra load needed with Love out. Jeff Green, in particular, played a huge game with 19 points to offset the loss of the team’s All-Star power forward.