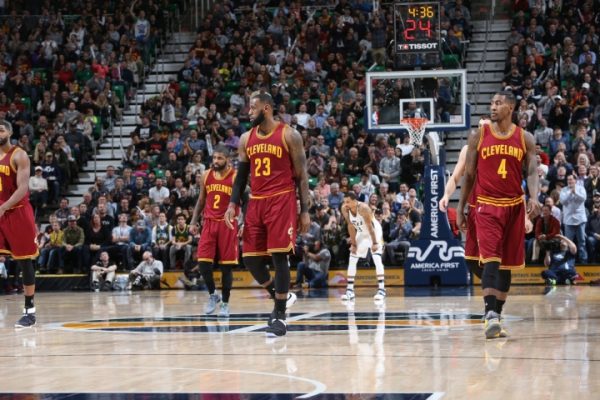 (Salt Lake City, UT) – Second-quarter struggles and an inability to sustain momentum during the third period proved to be too many obstacles for the Cleveland Cavaliers to overcome as they dropped a 100-92 decision to the Utah Jazz at Vivint Smart Home Arena on Tuesday night.

During the second period, the Cavs’ shooting went south as they headed to intermission trailing by a 56-41 score. The 12 points notched by the Cavaliers during the quarter marked a season low.

“The second quarter was bad basketball,” LeBron James said. “We couldn’t make a shot and they got back in transition. We got some good looks, but they just didn’t go down.”

The Cavs then quickly got back into the game after the break, scoring 17 unanswered points to briefly re-take the lead at 60-58. However, the Jazz quickly answered with 16 consecutive points of their own to boost the lead back up to 14 at 74-60. The Cleveland surge came primarily through the efforts of James, who scored 13 of those points.

Entering the final quarter trailing 75-66, the Cavs made a number of pushes to get closer, only to see the Jazz push the lead back to double-digits. In its final surge, Cleveland was able to trim its deficit down to six on an Iman Shumpert dunk with 2:37 left, only to see Utah answer with a 3-pointer that served as a dagger to the Cavs’ last-ditch comeback hopes.

“We got down so much that we used so much energy to come back and didn’t have it during the fourth quarter,” Cleveland head coach Tyronn Lue said. “We should have started the game that way.”

One of the key reasons for the Cavaliers’ struggles all evening was their inability to connect on the 3-pointer, ending the night with a 29 percent effort (9-for-31). In addition, they seemingly had no answer for the Jazz’s Gordon Hayward, who finished with 28 points, hitting on 10-of-12 from the field.

“We were a step late defensively,” Lue said. “If we don’t make shots, we have to be even better defensively and we weren’t.”

James led all scorers with 29 points, adding six rebounds and five assists. Kyrie Irving chipped in with 20 points, four assists and four rebounds, with Tristan Thompson ending the game with a double-double on 12 points and 12 boards. Kevin Love also finished with 12 points and grabbed nine rebounds, but suffered through a rough shooting night, ending with just a 4-for-14 effort from the field.

“We have to be ready to play from the beginning of the game. First half, I don’t think we played tough enough,” Thompson said afterwards. “The third quarter, we turned it up some during, but that’s not enough.”

Kyle Korver made his long-awaited debut in a Cavs uniform and got off to a good start by hitting a jumper. However, he missed his next four shots, finishing the night with those two points and three rebounds in 17 minutes.

“(I) felt like I hadn’t played since New Year’s Day. Personally, I haven’t had a practice or shootaround with the team, so I was kind of trying to figure out what I was doing out there,” Korver said. “I just need to know where I’m supposed to be. I have a lot of old habits of the (Atlanta) Hawks in my head and I’ve got to learn a new system.”

Despite Korver’s struggles, Lue wasn’t down on his effort.

“It’s always hard when you’re trying to incorporate a new player that’s gonna play for you in his first game,” Lue said. “Not knowing the defensive rotations, not knowing what we’re going to run for him offensively. In the second quarter, his movement alone really just opened things up for our guys to penetrate and get to the basket and they had to pay so much attention to him.”

The Cavaliers have little time to concern themselves with this contest considering an equally challenging game in Portland awaits on Wednesday night. During their past two trips there, they’ve severely struggled in double-digit losses and will look to change that scenario when the game tips off at just after 10:30 p.m. ET. The game is scheduled to be broadcast nationally on ESPN.

“We have a long way to go. We have a lot of room for improvement and that’s a good thing,” James said, “If you’re peaking now, that’s not what you want.”