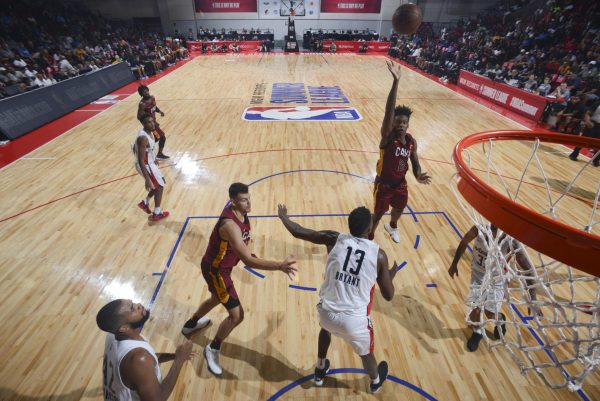 Two weeks after being drafted by the Cleveland Cavaliers, rookie guard Collin Sexton made his debut with the team on Friday night, playing 29 minutes for the Cavaliers’ summer league team. His performance helped the Cavs knock off the Washington Wizards, 72-59, with the rookie contributing 15 points and seven rebounds to the cause.

Six of those points came at the foul line, though Sexton had zero in the assist category and also committed two turnovers. The lack of assists was largely attributed to the poor shooting of his teammates, with the Cavaliers ending the contest by connecting on just 36 percent of their 73 attempts. Sexton himself was just 4-of-12 in the shooting category, though he was able to drill his only attempt from beyond the arc.

Despite the bumpy shooting effort, Sexton wasn’t discouraged from his first professional game:

Sexton was the lone rookie in the Cavs starting lineup, which included both Cedi Osman and Ante Zizic. The man who put the quintet together, summer coach James Posey, was happy with Sexton’s performance:

“Early on, I called out some things (and) he executed well, but as the game went on, you could feel his confidence, and he started calling plays on his own,” Posey said. “And that’s what I told him. As long as you feel confident in the sets that you’re calling, just go ahead, don’t keep looking at the bench.”

Sexton was the eighth overall selection in last month’s NBA draft and signed a four-year rookie contract on Wednesday for $20.2 million. With the departure of LeBron James and the Cavaliers seemingly on the verge of a major rebuilding project, Sexton will be one of the centerpieces in helping the Cavaliers return to the level of success they’ve enjoyed over the past seasons.

Given his current situation, Sexton spoke with members of his new team about heading into the post-LeBron era:

The Cavaliers’ summer league action continues on Saturday night against the Chicago Bulls, a game that will be broadcast on ESPN beginning at 9:30 pm ET.