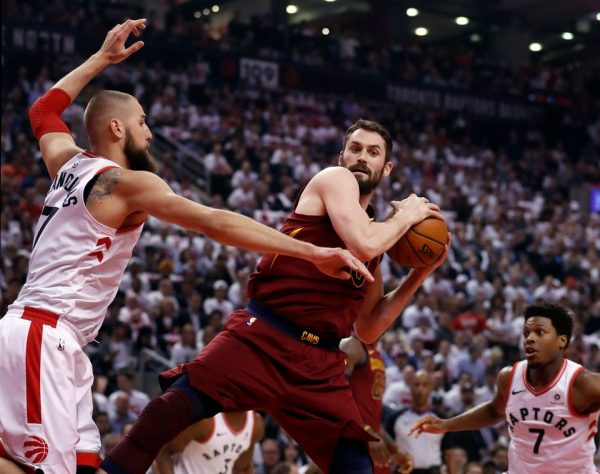 Another bumpy start for the Cleveland Cavaliers saw them fall behind the Toronto Raptors in Game 1 of the Eastern Conference semifinals series by double digits before coming back to pick up a 113-112 overtime victory. That comeback was spurred by putting Tristan Thompson at the 5 spot in place of Kevin Love, who had started the game there, a move which helped limit the effectiveness of Raptors center Jonas Valanciunas.

Asked after the game about the wisdom of Cavaliers head coach Tyronn Lue continuing to start him at center instead of his traditional spot at the 4, Love spoke about his comfort level at forward and chalked up the lineup strategy to Lue’s own insight:

Kevin Love on Tyronn Lue continuing to start him at the 5:

“I thought Tristan might start at the 5 [after his Game 7 against the Indiana Pacers]…I’ve played the four my whole career. Absolutely [I’m more comfortable at the 4]. I think Ty sees something different.”

Thompson collected another double-double in the game with 14 points and 12 rebounds, marking his second straight strong effort. Meanwhile, Love grabbed 13 rebounds, but had a miserable 3-of-13 shooting night from the field and finished with just seven points.

In his own postgame comments, Lue indicated that he’s more comfortable with Thompson continuing to come off the bench instead of starting at center. Should the Cavaliers get off to another slow beginning in Thursday night’s Game 2, Lue may have to revisit that decision.