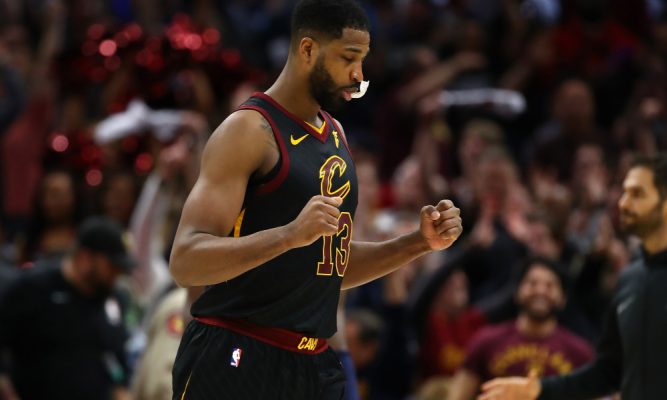 For the second consecutive game, Cleveland Cavaliers center Tristan Thompson put together a strong performance and helped the Cavs complete a dramatic comeback victory in Game 1 of their Eastern Conference semifinal series against the Toronto Raptors. After the game, Cavaliers head coach Tyronn Lue spoke about how he plans to use Thompson in the games ahead, noting that he will continue to use him off the bench, despite the big man being huge in the starting lineup in Game 7 against the Indiana Pacers.

“I like his impact off the bench, just his physicality,” Lue said about his use of Thompson. “He can change the game with his rebounding, his energy…I just like what he’s doing off the bench right now. His presence off the bench has been huge.”

Lue also spoke of Thompson’s effectiveness when it came to guarding Raptors center Jonas Valanciunas, who caused problems for the Cavaliers early, but struggled down the stretch:

Lue on third-quarter subs: "In the first half we went small and put Jeff on him (JV)…we tried to do it in the third quarter, but he started punishing us on the inside. I thought Tristan did a good job of being physical with him and keeping him off the glass."

Thompson completed a double-double on the night with 14 points and 12 rebounds, with his final two points of the game ultimately serving as the game-winner in the 113-112 victory.

The Cavs will now seek to put the Raptors in a huge hole with another road victory on Thursday night. That game will tip off at the unusual time of just after 6 p.m. ET.