Video: LeBron Leaves Cavs Fan Hanging, Who Plays It Off Like a Boss 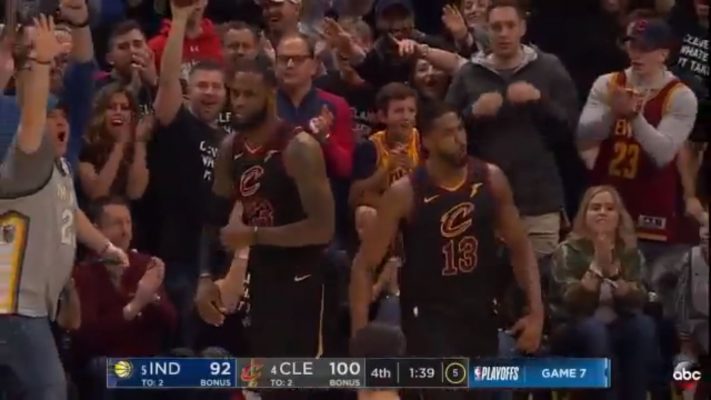 The Cleveland Cavaliers‘ seven-game series did not go how the team or most fans and experts expected it to go. However, in the end, it all turned out okay as the Cavs managed to advance to the Eastern Conference semifinals after an epic series with the Indiana Pacers.

The same could be said for a Cavs fan, who in the waning minutes of Sunday’s must-win game, tried to grab a high five from LeBron James. While James left the fan hanging, he refused to accept defeat and instead turned the whiffed high five into an epic solo celebration.

For Cavs fans, there was a lot to celebrate in Game 7. Not only did Cleveland win the deciding matchup in front of a raucous Quicken Loans Arena crowd, but James put on a show for the ages in the process. James finished the night with 45 points, nine rebounds, seven assists, and four steals. He finished the series averaging 34.4 points, 10.1 rebounds, and 7.7 assists per game.

While fans and the team alike can celebrate the victory today, they wont have much time to rest on their laurels. The Cavs will have just one day of rest before they head to Toronto to take on the No. 1 seeded Raptors on Tuesday night.

Hopefully the upcoming series is just a bit easier for James and company than the one they just completed.