What Derrick Rose Will Bring to the Cavs Offense Next Season 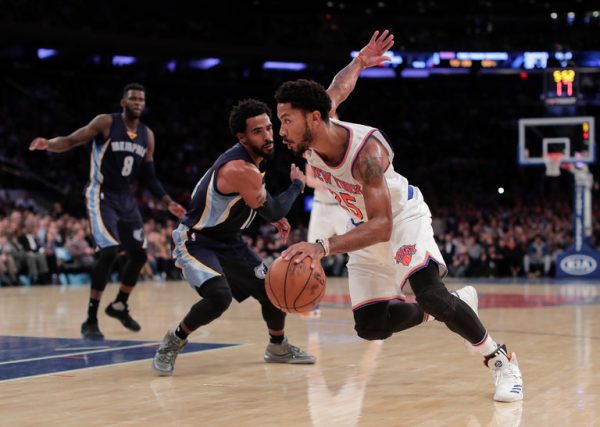 Derrick Rose‘s signing could be a big win for the Cleveland Cavaliers, and the former New York Knicks starter has already been seen working out with LeBron James in Las Vegas. His signing arrived just in the nick of time, given the ongoing Kyrie Irving debacle.

Let’s look at what the former MVP provides the Cavs, especially off the bench.

The major key is Rose’s willingness to forgo millions of dollars to play with the Cavs. The assumed $20 million plus asking price was far-fetched, but Rose could have commanded a tenable multi-year contract with some teams, likely in the $12-15 million per year range.

Signing with the Cavs means a couple of important things: He wants to be associated first with winning, and he’s willing to bet on himself for a bigger payday after the season. Therefore, Rose will have tremendous incentive to play well and find a way to stay healthy throughout the season. The 28-year-old hasn’t played more than 66 games since his 2010 MVP season. Coming off a meniscus tear from last season, maintaining his lower body through a playoff run will be a monumental feat.

What cannot be assumed is Rose serving as an Irving replacement — a foolhardy thought process. Even if Irving is traded, with Phoenix Suns point guard Eric Bledsoe coming back in return, Rose has to be seen by the Cavs strictly as a bench terror who scores at the rim (and the free-throw line) in bunches.

Rose is still a highly effective one-on-one player but struggles in the pick-and-roll because of defensive sagging off his terrible jump shot. He’s not a capable spot-up shooter, nor is he going to knock down threes at a respectable clip. He held an effective field-goal percentage of 47.1 percent and shot 21.7 percent from three last season.

“Rose averaged 18 points, 3.8 rebounds and 4.4 assists in 64 games for the Knicks last season — serviceable numbers, but his overall inefficiency on offense and defense placed him 51st of 82 point guards per ESPN’s Real Plus Minus. And this isn’t a fluke: Since missing the entire season with a torn anterior cruciate ligament in 2012-13, Rose hasn’t ranked in the top half of the league’s most efficient scorers, per Synergy Sports, and he hasn’t been worth more than a replacement player per Basketball Reference’s VORP.”

Ultimately, head coach Tyronn Lue will ask Rose to stick to his positives, to go directly into the paint with a vengeance, especially against second units. Any level of consistency with his jump shot will be a nice add-on, but should not be expected. His drive-and-kick game must be top-tier.

It’s essential that the still-athletic Rose show more desire in digging into opposing point guards, and consistently pester them out of their sweet spots. His playing time, and staying time on the team, depends on it.

As for the absolute positives — he can still do a lot of things that made him a crowd-pleasing MVP in 2010-11. He will never be the freak that once exploded over Goran Dragic, but he can still energize a team and put defenders on posters. That extra juice, from a player who could be starting for other teams, will be necessary. If he can stay reasonably efficient through the season, and into another likely Finals run — a huge “if” — Rose’s signing could pay dividends.