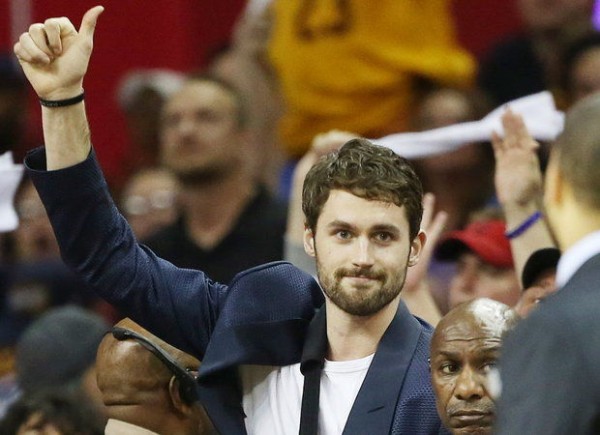 After having surgery to repair a dislocated shoulder back in April, power forward Kevin Love has been cleared to travel with the Cleveland Cavaliers for the rest of the playoffs according to Dave McMenamin of ESPN.

“Love traveled to New York to have the shoulder looked at by Dr. David Altchek last week while the Cavs were in Atlanta for Games 1 and 2 of the Eastern Conference finals against the [Atlanta] Hawks, said General Manager David Griffin.

“Altchek, who performed the season-ending surgery on Love’s dislocated left shoulder at the end of April, said the All-Star forward also can stop wearing the sling he’s used to stabilize it for the past month.

“Love rejoined the Cavs for Game 3 in Cleveland on Sunday, sitting in the second row behind their bench.”

The power forward out of UCLA received a huge ovation when he was showed on the “humungotron” at Quicken Loans Arena.