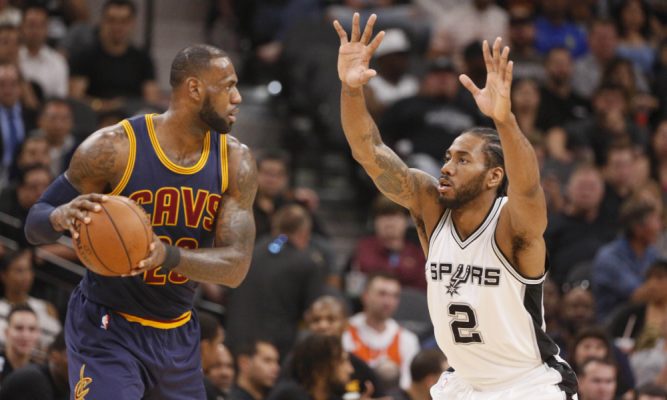 The tension between Kawhi Leonard and the San Antonio Spurs has reached fever-pitch levels — the likes of which have not been seen within the organization in decades. Everyone in the league knows that coach Gregg Popovich and the Spurs brass like to keep a tight ship, but this could potentially lead to a divorce between the player and the team.

According to Sam Amico of AmicoHoops.net, one team that is interested in potentially acquiring Leonard this summer is the Cleveland Cavaliers:

“The drama seemingly has given opposing teams hope that Leonard can be had in a trade this summer. And the Cavaliers are among those who are closely monitoring the situation in San Antonio, league sources told Amico Hoops on Tuesday.

“Now, the Cavs certainly would not be alone in trying to pry Leonard from the Spurs. He is a two-time Defensive Player of the Year and generally known as a team-first guy who only cares about winning.”

This comes as no surprise after ESPN’s Brian Windhorst revealed on Tuesday during his interview on “Outside The Lines” that he has talked to several NBA managers and they are all interested in the Spurs All-Star forward:

“At the end of this season, teams will call the Spurs and inquire the availability of Kawhi Leonard,” Windhorst said.

He added that the fact that this is happening is totally unprecedented given everything that we know about the Spurs’ culture.

The Cavs would benefit the most from gaining Leonard because not only would their chances of winning a title increase, but the chances of retaining LeBron James would also increase exponentially. Not to mention, the Cavs have been struggling defensively and are in need of a premier defender.

Leonard most definitely fits the bill with two Defensive Player of the Year awards on his resume. James was even quoted saying that Leonard is the one who defends him best. Add Leonard’s all-business approach to basketball and you have another All-Star who will fit perfectly with James’ all-world talents.

Amico tweeted last year that the Spurs were interested in Cedi Osman:

The Spurs have a reputation for success in developing international players and the Turkish forward is among those players that they are no doubt still keeping tabs on.

Osman has become a fan favorite recently after being given more playing time due to the Cavs’ mounting injuries. He continues to provide energy and hustle that the team needs from its second stringers.

Should Cleveland decide to acquire Leonard, they should probably include Osman in the package as San Antonio has already expressed interest in the rookie. Another asset that the Spurs are likely going to be eyeing is the Cavs’ lottery pick courtesy of the Brooklyn Nets. Whether the Cavs are willing to part ways with the pick depends on the result of the lottery and Leonard’s health.

The Leonard saga has dragged on for far too long and there appears to be no resolution in sight other than a breakup.

If that happens, the Spurs office will have a busy phone line this summer. Expect the Cavs to be one of the teams at the other end of the line.