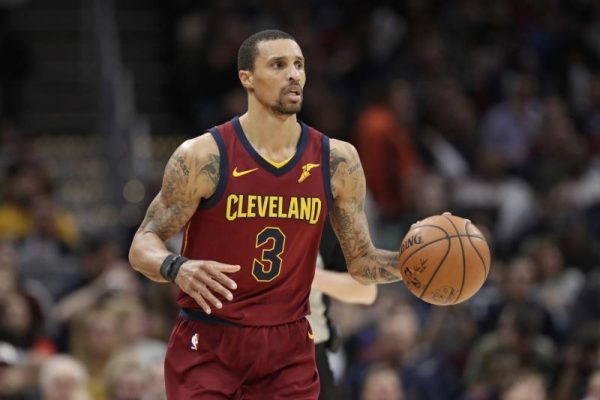 The Cleveland Cavaliers‘ 2017-18 season has been marked by one injury after another, with point guard George Hill joining that lengthy list on Friday night when he was forced from the game with an ankle injury. On Saturday afternoon, the Cavaliers released the results of Hill’s MRI, which indicated a left ankle sprain.

Hill will be out for Sunday night’s game against the Dallas Mavericks, with his estimated return uncertain. The veteran guard was one of four players the Cavaliers acquired on Feb. 8, with his veteran leadership and defensive skills seen as the key parts of his game.

In addition to the Hill statement, the team announced that veteran guard Kyle Korver will also miss the Dallas game because of lingering soreness in his right foot.

cleveland cavaliersDallas MavericksfeaturedGeorge Hillkyle korvernews ticker
← Previous Story Report: Tyronn Lue to Rejoin Cavs Tonight, However With One Caveat
Next Story → Report: Cavs Have Plan in Place for Tyronn Lue as He Returns to Team’s Bench