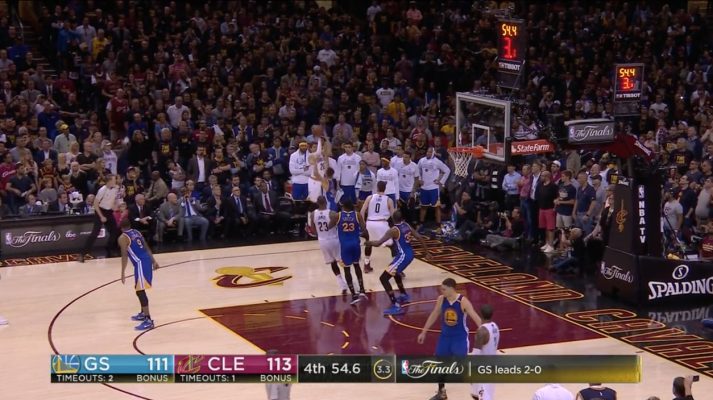 The defining moment in the 2017 NBA Finals between the Golden State Warriors and Cleveland Cavaliers went to former MVP Kevin Durant. The 6-foot-9 assassin nailed a pull-up 3-pointer with just under a minute left in Game 3 to put the Warriors up and secure a 3-0 series lead.

Although most people remember that sequence as the nail in the coffin, one player disappointingly remembers the play before. Newcomer Kyle Korver, who was brought in to be a complementary sniper to superstar LeBron James, missed a makable 3-pointer that would have given the Cavs a 116-111 lead with 50 seconds to play.

The forward’s missed triple was one of three misfired attempts from deep that the characteristically accurate sharpshooter would’ve normally made. Not being able to do his part to help the Cavs affected the 36-year-old greatly after the game as Scott Sargent of Bleacher Report cited:

“I had a great look in the corner,” Korver said with an are-you-kidding-me smirk, staring off into space following the game. “I still can’t believe it didn’t go down. I thought it was in. It’s a tough one.”

The shot was, in fact, one that everyone thought would fall. During the regular season, the 6-foot-7 shooting guard shot a sturdy 28-of-47 from the left corner, the spot where Korver misfired from in Game 3.

“The ball didn’t go in the basket for whatever reason,” Korver said. “It’s tough to explain right now. We all have plays we want back. I thought it was in. It left my hand, felt good.”

Although the veteran wanted the shot to go down, he realized it was just one small piece of a big puzzle and he had to move on from it:

“I think going back, everyone is referring to that shot. It didn’t feel…it felt good when it left my hand. We were up when I shot it. Who knows? They come down and hit a three and change the game,” Korver said. “It’s one of those things that makes sports awesome. You never know what’s going to happen next. Definitely…I don’t want to make a big deal in my head, though. I wish that shot would’ve gone down for sure.”

In his first full season with the Cavaliers, Korver is off to a great start averaging 10.7 points on a deep roster. In addition, he holds the team’s highest net rating (13.2) and the Cavs are 18.2 points per 100 possessions better than their foes when the 15-year pro is on the court versus off of it. His teammates can’t stop raving about him, including star guard Dwyane Wade, who forms a one-two punch off the bench with him:

“He makes our team special with what he’s able to do and the way he’s able to move off the ball,” said Wade to Bleacher Report. “He never stops moving, and even when he’s not making shots, he’s still a threat with the defense. They always got to have an eye on him, so it allows other guys to be able to have moments where they can sneak-attack or have a little bit more space on the floor. I know LeBron is the guy and gets the headlines, but to me, Kyle is as important to our success, for sure.”

Even the King knows how big it is to have Korver on the hardwood:

“A guy who shoots extremely well like he does, for us to have Kyle, it’s a great safety net,” James told Bleacher Report. “Anytime [an opponent] tries to take a body off of him or lose him…it’s big-time.”

For now, Korver will continue to hit threes from distance and be a strong auxiliary weapon to James and the Cavs; however, he knows his time for redemption will come in June when the guard gets to show how deadly his scorching shot can be.