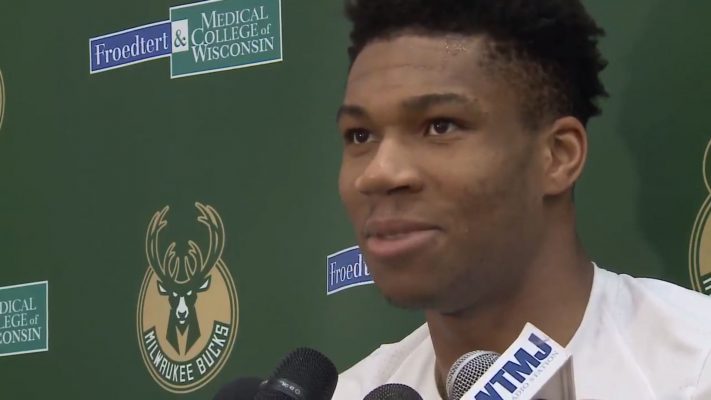 Milwaukee Bucks phenom Giannis Antetokounmpo currently holds the most votes for the 2018 All-Star Game. If he should hold onto that lead, the 23-year-old star would serve as the Eastern Conference team captain under the game’s new format.

Antetokounmpo stated that he would pick any of his teammates should they join him in the All-Star game, but if they are unavailable, the 6-foot-11 forward plans on picking LeBron James. It’s not a surprising choice. After all the four-time NBA MVP is only behind Antetokounmpo by just under 7,500 votes.

His reasoning for picking James, however, is a bit less predictable.

In new #NBA All-Star format, top vote getter in each conference will be a captain & get to draft his team. I asked @Giannis_An34 who he would select with the first pick. His answer may not surprise you, but his reasoning is classic Giannis: pic.twitter.com/yQUttzgWLm

“If my teammates are available I’m going with my teammates, but if not I gotta go with LeBron James,” he said. “Best player in the world, so we can have good relationship in free agency. You never know, he might come play here.”

Antetokounmpo’s answer drew laughs from the reporters on hand, but if he ever were to join forces with James it wouldn’t be laughing matter. While James still remains the King of the NBA, Antetokounmpo continues to prove that he is the unequivocal heir to the throne.

The All-Star game polls are open until Jan. 15, so there is still ample time for James to claim the role of captain. If James should end up as one of the captains, Antetokounmpo will have to wait and see if the three-time NBA champ shares a mutual interest to play side-by-side.