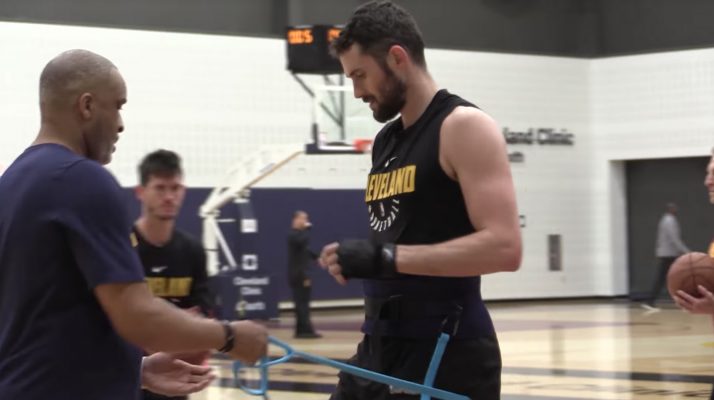 Just over a week ago, Cleveland Cavaliers big man Kevin Love said that he was still about a month away from returning from an injury he sustained back in late January. It now appears possible that Love will be back sooner than expected.

On Friday, it was reported that Love has seemingly taken another step in his rehab and is now able to catch and shoot with his broken hand.

Kevin Love has been able to catch and shoot with his broken hand. Still possible he comes back earlier than expected.#Cavs pic.twitter.com/oGtebFiPwv

“I was able to start shooting a little bit with my right hand, dribble a little bit with my right hand,” he said. “We’ll progressively get to my left, but I guess one of the things I can do now is catch the ball, guide it and shoot it within 12-, 15-feet. So that feels good to be able to do something other than run on the treadmill, so it’s nice.”

A report earlier in the week indicated that the Cavs have no intention of rushing Love back to the court, but halfway through the initial eight week timetable, it does seem that the All-Star big man is coming along quicker than anticipated.

Prior to his injury, Love was averaging 17.9 points and 9.4 rebounds per game. While he will have several new teammates to build chemistry with once he does return, it shouldn’t take long for Love to reclaim his position as the second scoring option behind LeBron James.

Regardless of whether Love comes back in mid-March or early April, he will only have a few weeks of regular-season play before the 2018 NBA playoffs begin. Hopefully he is able to return to form soon so that the Cavs can enter the postseason at full strength in time for another title run.