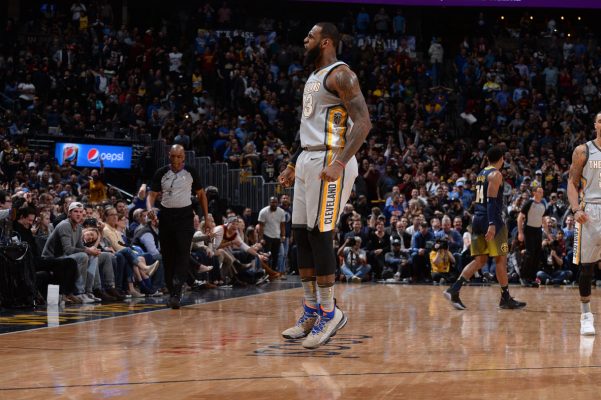 (Denver, CO) — Scoring nine of his 39 points on the night in the final two minutes, LeBron James helped the Cleveland Cavaliers defeat the Denver Nuggets, 113-108, at Pepsi Center on Wednesday night. James’ heroics helped the Cavaliers bounce back from being on the wrong end of a 20-4 run that lasted until nearly midway through the fourth quarter.

“To close the game out, that’s what my teammates expect out of me,” James said immediately after the game.

In that final period, the Cavs had already allowed the final 11 points of the third quarter before quickly getting outscored 9-4, which helped give the Nuggets their first lead of the game. Cleveland took the lead back for good on the strength of a trio of unanswered 3-pointers, but Denver was still within two points at the two-minute mark.

“He wanted it and the ball was in his hands,” Cleveland head coach Tyronn Lue said of James’ late heroics. “We had to ride him a little more than we wanted.”

James took over by first connecting on a layup with 1:41 to play. Just 30 seconds later, he drilled a long-range bomb to give the Cavaliers a 109-104 lead. After the Nuggets chopped two points off that deficit, his fadeaway jumper with 41.4 seconds left pushed the margin back up to five. A pair of Denver free throws again made it a one-possession game before James delivered the dagger with just 10.5 seconds to go, falling out of bounds on another fadeaway.

“I was able to shake free and trust what I’ve put into the game,” James said. “I’ve put a lot of work into my perimeter shot.”

James picked up a double-double by also dishing out 10 assists, while adding eight rebounds. He was one of four Cavs to score in double-figures, with Rodney Hood tossing in 15 and Larry Nance Jr. contributing a double-double with 13 points and 13 rebounds, adding four steals. Meanwhile, veteran Jeff Green rounded out the quartet by coming off the bench to score 10 points.

“We have a lot of resiliency,” Nance said. “They threw their punches, but we were able to come away with the win.”

Paced by 64 percent shooting from the field in the first quarter, the Cavaliers ended that opening period with a 15-point advantage at 37-22. That resulted in a reversal of roles from last Saturday’s meeting between the two teams, where it was the Nuggets that had jumped out to a double-digit advantage. Part of the Cleveland success could be attributed to its defense, which forced six turnovers in those first 12 minutes.

Each team exchanged runs throughout the second quarter, with the Cavs’ shooting percentage dipping to a still-solid 50 percent for the period, while forcing five more Nuggets turnovers. However, Cleveland had opportunities to blow the game open, only to see Denver charge back and get as close as five points. Still the Cavaliers closed out the final two minutes on an 11-4 run to take a 70-58 lead into halftime.

“We just helped each other out,” Hood said about the Cavs’ defense on the night. “We were flying around all night and it really helped us.”

In the third quarter, the Nuggets dominated on the glass, while the Cavaliers managed to still maintain a relatively comfortable lead despite shooting just 40 percent from the field. With 3:39 remaining in the period, Ante Zizic completed a three-point play to give the Cavs an 89-76 lead, but the Nuggets ran off the final 11 points to make it a two-point game entering the final quarter. In that final stretch, Cleveland couldn’t buy a basket, missing six shots from the field as well as a pair of free throws.

“I don’t really worry about the standings,” Lue said about the challenge over the final month of the regular season. “We just have to keep getting better.”

The Cavaliers head to Los Angeles for the weekend, playing two games at Staples Center. The first of those contests will be on Friday night against the Clippers, with tipoff set for 10:30 p.m. ET. That’s followed by a Sunday night matchup against the Lakers that will get underway at 9 p.m. ET.