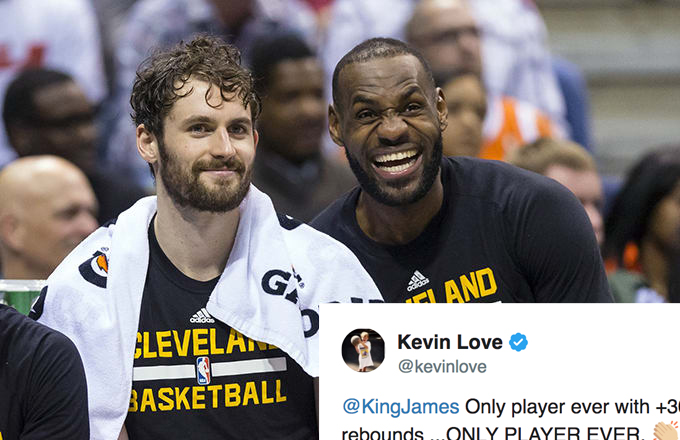 LeBron James reached yet another career milestone in the Cleveland Cavaliers‘ win on Tuesday night, becoming the first NBA player ever to reach 30,000 points, 8,000 rebounds, and 8,000 assists for his career.

Cavs big man Kevin Love has seen many of those points, rebounds, and assists first-hand as James’ longtime teammate. While Love is still sidelined by injury, he took to social media on Tuesday night to celebrate his teammate’s incredible accomplishment.

Love is still several weeks away from his return from a fractured bone in his left hand, but it’s clear by his response that he is raring to get back on the court and continue playing with James and the rest of his teammates.

Fans and players alike have been lucky enough to watch James dominate the NBA for well over a decade. While it is easy to get used to his seemingly unending greatness, it’s milestones like these that remind people just how great the four-time NBA MVP truly is.

As he continues his storied career, we’re sure to have several more nights where James achieves an incredible milestone. Thanks to Love, we were reminded that it’s important to celebrate every single one.