LeBron James Bashes Donald Trump: He ‘Don’t Give a F— About the People’ 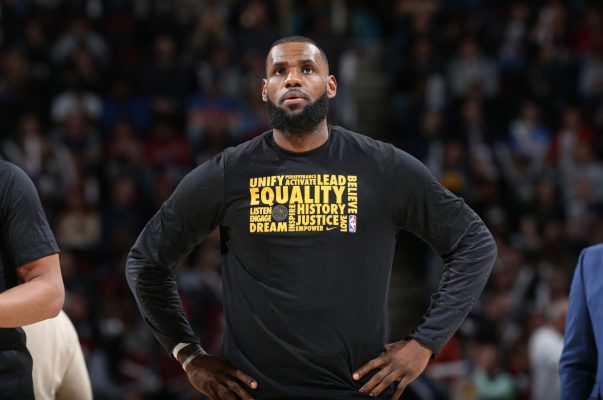 Cleveland Cavaliers forward LeBron James hasn’t been shy in recent years in expressing his opinions from a political perspective, with much of his criticisms over the past year in that area directed at President Donald Trump. That ire toward Trump continues with James set to play in Sunday’s All-Star Game.

James and Golden State Warriors forward Kevin Durant were interviewed by ESPN broadcaster Cari Champion on Jan. 14, one night before the Cavaliers and Warriors faced each other at Quicken Loans Arena. During the interview, the Cavalier veteran expressed both his disillusionment and frustration with Trump:

“The climate is hot. The number-one job in America, the appointed person is someone who doesn’t understand the people, And really don’t give a (expletive) about the people. When I was growing up, there was like three jobs that you looked for inspiration … It was the president of the United States, it was whoever was best in sports and it was the greatest musician at the time. You never thought you could be them, but you can grab inspiration from them.”

James also spoke about the need for both fans and those who consider him a role model to reject what he believes is Trump’s divisiveness:

“And this time, right now, with the president of the United States, it’s at a bad time. While we cannot change what comes out of that man’s mouth, we can continue to alert the people that watch us, that listen to us, as this is not the way.”

A supporter of 2016 Democratic presidential candidate Hillary Clinton, James has aimed a number of barbs at Trump during the his time in office. These have included social media remarks in the wake of last summer’s tragedy in Charlottesville, Va. One month after that, James also showed support for Durant’s teammate, Stephen Curry, who had indicated that he didn’t want to visit the White House to be honored by Trump. That rejection resulted in Trump rescinding an invitation that had actually not been offered at that particular point.

Trump’s four-year term in office is scheduled to end on Jan. 20, 2021, with the prospect of re-election in 2020 possibly extending his administration into 2025. James is 33 years of age and will undoubtedly play into the next decade. Whether or not he outlasts Trump may depend on those 2020 election results.