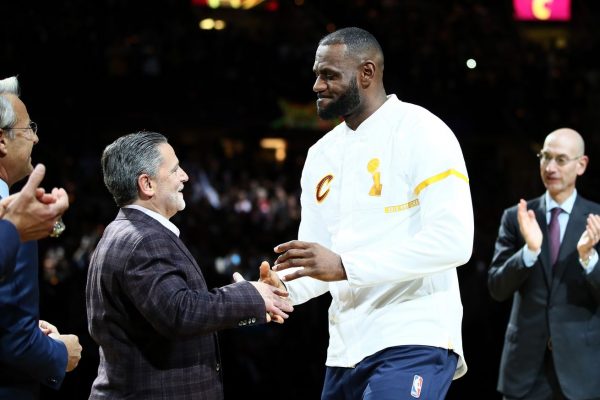 The payroll of the Cleveland Cavaliers is currently the highest among all NBA teams, yet apparent conflict between LeBron James and team owner Dan Gilbert over whether it should be even higher is reportedly causing problems between the two.

“I just hope that we’re not satisfied as an organization.”

A number of tweets over the next day followed, which resulted in James clarifying his attitude:

“I not mad or upset at management ’cause [general manager David Griffin] and staff have done a great job, I just feel we still need to improve in order to repeat … if that’s what we wanna do.”

While Gilbert didn’t respond directly, Griffin did prior to the team’s overtime loss to the Sacramento Kings on Wednesday.

“The comment about the organization being complacent I think is really misguided,” Griffin said. “Organizationally, there is absolutely no lack of clarity on what our goal set is. We are here to win championships. … Anyone insinuating that this organization is about anything other than that would deeply upset me because ownership has invested in this at an absolutely historic level.”

Gilbert has been willing to go over the salary cap in order to challenge for a title. During James’ first season back in Cleveland in 2014-15, Gilbert paid $7 million in luxury taxes for a team that reached the NBA Finals. Last season, when the franchise captured its first-ever title, Gilbert was assessed a $54 million luxury tax bill.

The sources that Windhorst cites indicated that James re-signed with the Cavaliers based on the belief that Gilbert would spend whatever it took to win a title. Gilbert reportedly agreed to that, according to those sources.

Part of Griffin’s remarks focused on the questions concerning the willingness of Gilbert to make a further investment.

“We can absolutely increase payroll if it’s the right piece at the right time. I’ve never once been given a mandate of any kind, relative to money,” Griffin said. “We’re not going to do something where we go ask for more money unless we believe it makes us appreciably better. … As we have all along, ownership will do what needs to be done.”

The Cavaliers have had 14 players on their roster, one below the roster limit, for the past three weeks. Windhorst explained a possible reason for not immediately filling that spot:

“If the Cavs were to add a player, it would cost them the new salary plus an additional $2.50 per dollar in tax for roughly the next $600,000 they would spend. After that, the penalty would increase to $3.25 in tax per new dollar spent.”

Windhorst also notes that Cleveland still has trade exceptions worth $4.8 million and $4.4 million with the trade deadline less than a month away.

Cavaliers head coach Tyronn Lue is staying out of the fray, preferring to focus on getting the team back on track after losing six of their last eight games.

“We gotta focus on basketball, getting back to winning. We’re the third-best team in the NBA right now,” Lue said. “We’re a great team. We’re the champs, so we just got to get back to playing championship basketball. That’s it.”

“Everyone that’s part of this journey — coaches — we all got to be better. Everyone has got to take a step forward and just be 1 percent better. So, LeBron’s comments is what it is.”

Turmoil at this time of year seems to have become a tradition for the Cavs. Two years ago, they had a 19-20 record and eventually reached the NBA Finals. Last year, Lue took over midseason as head coach for the fired David Blatt and led the team to a title. Right now, the Cavaliers have a 30-14 record, with a winning streak probably the best way to eliminate such conflicts.