Cleveland Cavaliers vs. Detroit Pistons Game Recap: When It Rains, It Pours 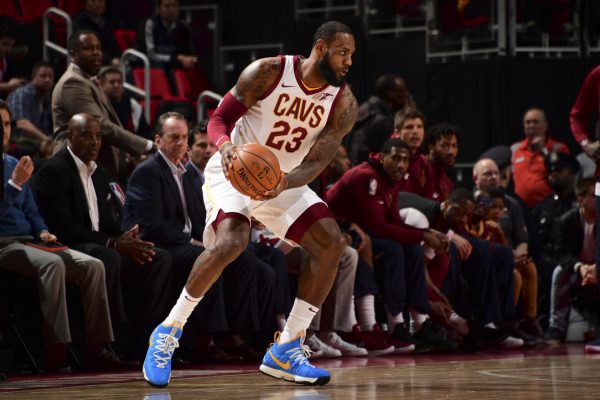 (Detroit, MI) — A miserable shooting effort to begin the second half was costly to the Cleveland Cavaliers as they fell to the Detroit Pistons at Little Caesars Arena on Tuesday night by a score of 125-114. To compound the bad news on the night, Kevin Love left the game with an injury that will keep him out for an extended period of time.

Leading by four at the break, the Cavaliers came out and shot 29 percent from the field during the third quarter. That included missing 11-of-12 to start the period, which allowed the Pistons to go on a 20-6 run that gave them their biggest lead of the game at 79-68. The Cavs managed to go on an 11-3 surge of their own to chop the margin to three, then headed into the final quarter trailing 89-84.

“They made some good shots,” LeBron James said about the Pistons. “As a team, they played very well.”

Detroit increased its lead to nine early in the fourth, but Cleveland managed to get its deficit down to two at 103-101 on a pair of Kyle Korver 3-pointers, the latter coming with 7:08 to play. That would be as close as they got as the Pistons put together a 19-5 run to put the game away, with the Cavaliers ending the second half with a 35 percent shooting percentage from the field. On the other end, the Cavs defense allowed 66 points in the second half.

“We didn’t guard tonight, we’ve gotta be better than that,” Cavaliers head coach Tyronn Lue said after the game. “A lot of blow-bys, we didn’t take the challenge.”

Love left the game after just four minutes of action and was later diagnosed with what’s reported to be a non-displaced fracture in his left hand. The injury could keep him off the court for six to eight weeks, with an official update set for Wednesday following a further examination.

“When it rains it pours. It’s tough to lose an All-Star like Kevin, especially the way we’ve been going,” Lue said. “Guys have to step up and play better.”

James led the Cavs with 21 points, seven assists and six rebounds, while Isaiah Thomas chipped in with 19 points and five assists. The absence of Love and the cold shooting (2-of-10 from the field) of J.R. Smith required much more production from the bench, which collectively scored 62 points on the night.

“It’s a huge blow for our team. We’re already limited with our bigs right now,” James said about the Love injury. “It sucks, it sucks big time.”

“Defensively, we weren’t on the same page,” Frye said. “As far as Kevin, it’s a tough break because he’s been playing so well.”

A slow start for the Cavs at the outset also put them in an early bind as they missed 7-of-10 from the field to start the game, coupled with Thomas committing four turnovers in the first five minutes of action.

“Right now, I’m not confident like I usually am,” Thomas said about his continuing struggles to get back to his past All-Star level. “My body’s not allowing me to do that.”

Still, the Cavaliers only trailed 15-12 with five minutes left in the opening quarter, which was when the Pistons went on an 18-9 run to take their largest lead of the half at 33-21 with 1:23 left. That margin was sliced in half by the time the horn sounded, with Detroit holding a 33-27 lead.

The Pistons would continue to maintain the lead for much of the period, continuing to benefit from their solid ball movement that saw them dish out 14 first-half assists. However, Cleveland connected at a 57 percent from the field during those 12 minutes, taking some small leads before using the final 92 seconds of the quarter to run off six points unanswered points and head to the break with a 63-59 advantage.

“We’ve just gotta keep pushing. It’s gonna be tough, but we gotta figure it out,” Thomas said. “This is a marathon, not a sprint.”

The Cavaliers will be back in action on Wednesday night, returning home to face the Miami Heat in a game that will tip off just after 7:30 p.m.