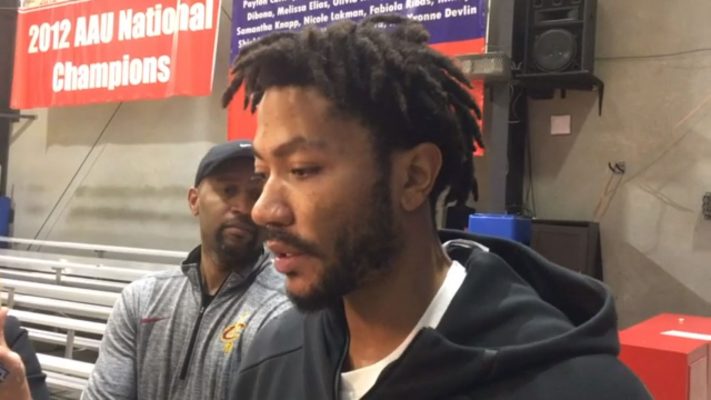 Derrick Rose hasn’t played a game since Nov. 7 due to a sprained left ankle and while the point guard was reportedly considering retirement earlier this season, he could be just days away from his return to the court.

Both the Cleveland Cavaliers point guard and Cavaliers head coach Tyronn Lue spoke with reporters on Friday regarding his return. It seems that Rose has been showing great progress in practice and said on Friday “theres a chance” he will return to the court during his team’s current five-game road trip.

“I feel like I can fit anywhere,” Rose said when asked what his role will look like for the rest of the season. “Like I said, I just want to be a part of the team. I said that before the season. I could be the equipment guy here, it really don’t matter.

“I just want to be a part of it. … I want to be in the heat of the moment, I want to feel it. I want to play games, too. Play as many games as possible, but it’s going to take time.”

Rose discussed his rehab after participating in Friday’s full-court practice.

While Lue wouldn’t go into details on when Rose might return, he did discuss how Rose would fit into the team’s current rotation.

“I hope so, his workouts have been going well. He had a great workout the other night,” Lue said of Rose’s progression. “Just kind of see how his body feels and go from there, but I don’t know the timetable.”

Lue explained that Rose will take minutes away from Dwyane Wade in an attempt to keep Wade fresh for the postseason.

“I think playing D Wade on a lot of back to backs has been tough for him,” Lue said Friday. “Some games where he doesn’t feel great, but we don’t really have the extra ball handler to sit him. So when D Rose gets back, he’ll definitely help with that and help with D Wade getting his rest and being able to feel good on the floor.”

Wade has thrived in his new role coming off the bench this season. He’s averaging 11.1 points, 3.8 rebounds, and 3.7 assists in 23.5 minutes per game. He turns 36 years old this month, though, and seems to be in favor of letting Rose assume some of his minutes when the former NBA MVP is ready to return.

“I talked to him already. (Wade is) 50 years old, so, sometimes you just don’t have it. But with all the guys being out, just don’t have the luxury right now,” Lue joked. “So we talked about it. He understands and he’s for it.”

Rose has only played seven games so far this season, but he showed promise as a productive member of the team’s lineup despite their early-season struggles.

Though the Cavs have suffered several injuries already this season, it appears that they are getting closer to full health. Rose’s return will offer the Cavs just one more offensive option in their rotation.