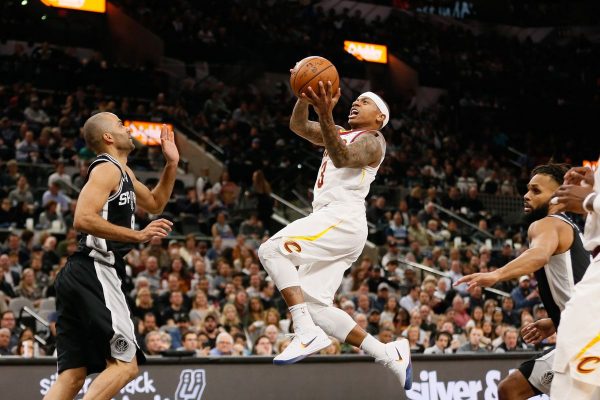 Isaiah Thomas may be on the hot seat with his fellow Cleveland Cavaliers teammates, but it appears that he has nothing to worry about when it comes to team owner Dan Gilbert‘s opinion of him.

According to Ken Berger of Bleacher Report, Thomas has become one of Gilbert’s favorite players on Cleveland’s roster.

“Thomas has become a favorite of Gilbert, and they often exchange calls and text messages, a league source familiar with their relationship told B/R,” Berger wrote. “This isn’t necessarily unusual on a team with an owner who is as involved in the basketball side of things as Gilbert is. It also isn’t great for locker room chemistry, because the rest of the players know it.”

Gilbert playing favorites could be playing a factor when it comes to the reported divide within the Cavs’ locker room. Given LeBron James‘ mixed history with Gilbert, it could also be part of the reason why James was reportedly upset when the Cavs traded for the 5-foot-9 guard this past summer.

“LeBron just looks at everybody as a shill for Dan,” the league source said.

This report doesn’t bode well for a team that has struggled mightily as of late. Thomas has certainly played a role in those struggles and has yet to find his place in the locker room or on the court. That has not kept him from making news with his words on several different occasions. It’s possible that his relationship with Gilbert has emboldened him to speak out when he otherwise might have kept quiet.

Hopefully, Thomas, James, and the rest of the Cavs are able to overcome the recent drama and regain focus on what their mutual goal is for this season. Given their current issues, however, it’s unclear how likely that really is.