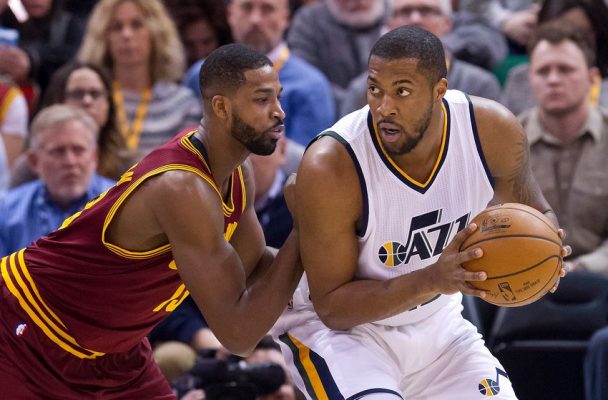 It’s no secret the Cleveland Cavaliers are struggling.

Losers of their last four straight contests and last eight out of 10 games, multiple players are reportedly doubtful that the current team can win an NBA title. With that said, a shift to the roster appears likely as NBA insider Marc Stein of the New York Times reported earlier this week.

According to Adrian Wojnarowski of ESPN, the Cavs are looking to add size and Utah Jazz big man Derrick Favors is a potential trade candidate:

.@wojespn today on The Jump: “Cavs are looking to add size. A player who is available that teams are calling about who could help them is Derrick Favors from the Jazz.”

Favors, 26, is averaging 12.4 points and 6.9 rebounds on a career-high 55 percent shooting from the field this season. As star center Rudy Gobert has become the primary big man in Utah and Favors is moving towards unrestricted free agency in the summer, the eight-year veteran has been included in trade rumors since the beginning of the season.

The 6-foot-10 power forward is slated to make $12 million this season and the Jazz are looking to move him before the Feb. 8 trade deadline so they don’t risk losing him in free agency for nothing. If the Jazz were to include a player like Rodney Hood, who is making $2,386,864 this season, the two teams could make something work.

If the Cavs want to make a significant change to enhance their chances of winning a championship, the time to do it is now. After the trade deadline, it will be very hard to acquire sensational pieces who can make a vast difference. The clock is ticking.