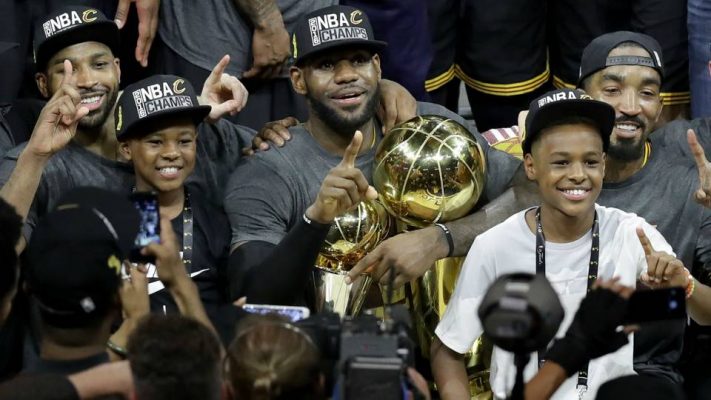 The eventual retirement of Cleveland Cavaliers forward LeBron James isn’t something either basketball fans in general or Cavaliers fans in particular want to contemplate. However, James is looking ahead to when that time comes, noting that his three children will be a major factor in that ultimate decision.

James, who indicated that such a decision is still years away, spoke on the topic after the Cavaliers’ shootaround in Toronto on Thursday. He offered the following thoughts on the subject, according to Jeff Zillgitt of USA Today:

“I’ve got a 10-year-old boy (Bryce), 3-year-old girl (Zhuri). Daddy side kicks in sometimes. That will be a deciding factor in how long I want to play.”

James expounded on his current state of mind, which is fueled with visions of both personal and team goals, the latter of which is focused on winning more NBA titles:

“I’ve already went further than I thought I would go. Every thing after this point is extra credit. Fifteen years. I don’t know, I’ve been in this spotlight for half of my years. I’m 33 now. This thing started when I was 15. 18 years I’ve been in this light. I’ve already exceeded everything I’ve dreamed about. At this point, I’m just adding crazy toppings on the cake like my daughter would do. Throw all kinds of stuff on the cake and whatever happens happens.”

James compared that decision to getting married:

“I don’t know until you make that decision. The game will let you know when it’s over with,” James said. “Retirement for me is like getting engaged. I didn’t know if I was ready or not. I just felt it was the time. Timing was right. The vibe was right. Did I know I was ready for marriage? I don’t know. I never had nobody in my family get married before. I never experienced it.

“I definitely never had nobody in my family play in the NBA and retire. So, we’ll see. We’ll see.”

James turned 33 less than two weeks ago and is in his 15th season, but his early-season performance has made him a strong candidate to win the league’s MVP award. If he’s selected, it would mark the fifth time he’s won the accolade.