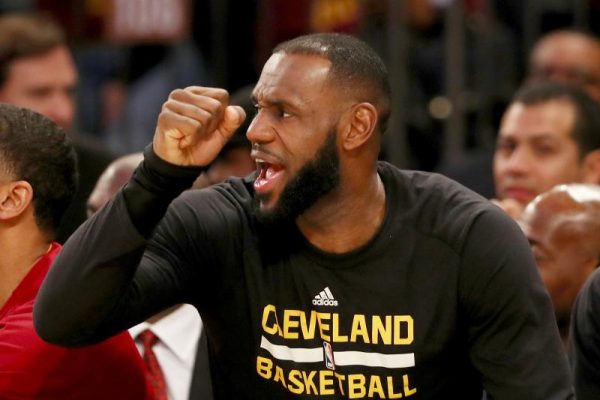 The Cleveland Cavaliers nearly came back from a double-digit fourth quarter deficit on Tuesday night against the Milwaukee Bucks. They eventually lost the game, but the virtual comeback was still quite impressive. What made the comeback even more incredible was that LeBron James was on the bench for much of it.

James watched on the bench for the first 8:22 of the fourth quarter as a lineup of Dwyane Wade, Kyle Korver, Jeff Green, Tristan Thompson, and Jae Crowder pulled off a 19-0 run. Only after Wade missed a 3-pointer and Bucks point guard Malcom Brogdon hit a three of own did Cavaliers head coach Tyronn Lue decide to put James back into the game.

“It was the perfect way to do it,” James told Cleveland.com. “It was perfect.”

The three-time NBA champion went on to score nine points in the final 3:38 of the quarter. He gave the Cavs a real chance to win the game when he nearly stole the ball from Bucks star Giannis Antetokounmpo with seven seconds left in the game. Antetokounmpo managed to hold onto the ball, though, and converted a clutch layup to give his team the lead, 118-113, with just 5.9 seconds left.

Following the contest, James explained why it was the right call to leave him on the bench.

“The momentum, it’s that simple,” James said. “We started the fourth quarter down, I don’t know how many (15 points). They had the momentum, they was playing well. Just let them keep going. I mean, why not? We’re all professionals.

“Everybody that was on the court has been in games where they came back and had to close out. Whenever they needed me, I was ready to go back.”

As for Lue, he didn’t explicitly discuss his decision to leave James on the bench, but instead complimented his players who nearly completed the impressive come-from-behind win.

“Kyle and T-Top (Thompson) really worked well together coming off a shot or making that extra pass and it was just good to see those guys play well together.”

Seeing the Cavs lose has been incredibly rare as of late. In the last 20 games the Cavs have only lost twice, and both contests were decided in the final minutes of the game. They are undoubtedly one of the most dangerous teams in the NBA and are once again considered favorites to return to their fourth straight NBA Finals. The fact that Cleveland can compete at such a high level with James sitting on the bench makes the team that much more impressive.