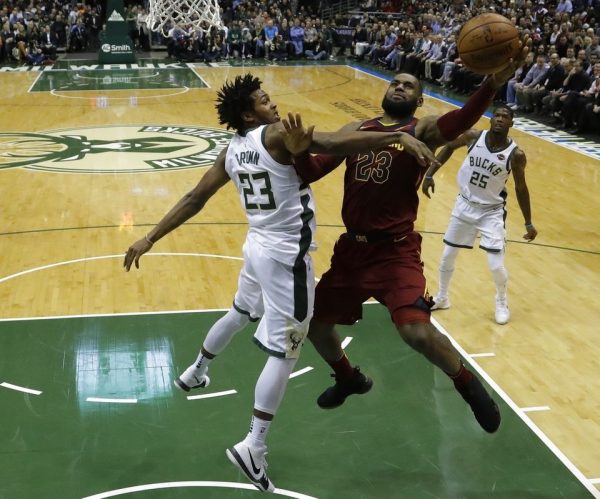 (Milwaukee, WI) — Despite a furious rally that saw them completely erase a 20-point early fourth-quarter deficit, the Cleveland Cavaliers weren’t able to convert key baskets down the stretch and dropped a 119-116 decision to the Milwaukee Bucks at BMO Harris Bradley Center on Tuesday night. The loss marked only the second time in the last 20 games that the Cavaliers have been on the losing side of the scoreboard.

The Cavaliers trailed 103-83 with 10:49 to go in the game when they erupted with a 24-2 run that was largely keyed by the bench contributions of Dwyane Wade and Jeff Green, who each scored nine points during the quarter. That made the score 107-105 with 5:11 to go, with LeBron James‘ three-point play with 2:04 left giving the Cavs their last lead at 113-112.

“We got them to take tough shots,” Wade said of the comeback. “Maybe it was their time to miss, maybe it was just good defense.”

However, James and Kyle Korver each missed a pair of three-point attempts in the final moments, allowing Milwaukee to score six unanswered points. The clincher came with 5.9 seconds remaining on a three-point play by Giannis Antetokounmpo.

“We don’t expect him to miss,” James said of Korver’s 1-for-7 night from the field. “You ever see us go for an offensive rebound on one of his shots?”

James finished with a game-high 39 points, while handing out seven assists. Surprisingly, he had just one rebound on the night. Kevin Love picked up another double-double with 21 points and 10 rebounds, while Wade and Green finished with 14 and 13 points respectively. Jae Crowder rounded out the Cavs’ double-figure scorers by chipping in with 10 points and also adding six boards.

“We did a good job defensively ,” Cavaliers head coach Tyronn Lue said of his team’s fourth-quarter effort. “We were able to get stops, get back in transition.”

The first half saw the quickly changing fortunes of the game, with each team holding a double-digit lead at some point. The Cavaliers began things by scoring the first seven points and jumping out an early 15-4 advantage. While the Bucks countered with a 10-2 run of their own, the Cavs were able to hit from the field at a 62 percent rate over the entire period, which gave them a 34-30 lead at the end of the quarter.

Cleveland maintained that four-point margin at 40-36 with exactly nine minutes to play in the half, which was when Milwaukee unleashed a 28-10 surge that gave them a 64-50 lead with 2:46 to go. The beginning of that push was marked by 11 unanswered points by the Bucks, who ended up taking a 69-58 lead into intermission and shooting 63 percent (15-of-24) from the field for the quarter.

“Defensively, we couldn’t get stops in the first half,” Lue said.

The Bucks were able to maintain that double-digit advantage once play resumed, boosting it as high as 18 points in the third, despite multiple efforts by the Cavs to forge a comeback. The Cavaliers were handicapped by continued defensive woes that saw the Bucks connect at a 57 percent rate from the field in the quarter and self-inflicted wounds that included six turnovers during the period. By the time play had ended for the period, the Bucks had increased their lead to 15 at 98-83.

“We were just trying to be aggressive in the open court because we knew that they didn’t have a chance to get back in transition,” Green said about the fourth-quarter surge.

Defensive woes during the second and third quarters helped play a large part in putting the Cavs in their huge hole, with the Bucks hitting 60 percent (27-of-45) during those periods.

“They shot the heck out of the ball in the first half,” James said. “We have to be better, but I thought we were aggressive in the fourth quarter.”

The Cavaliers host the Chicago Bulls on Thursday night. Tipoff for that game will be just after 7 p.m. ET and serve as the Cavs’ final home game of 2017.  After that contest, eight of the team’s next nine games will be on the road, beginning with their Christmas Day matchup against the Golden State Warriors.

“Erasing a deficit like that reminded me of the New York game,” Love said. “It just showed that we’re never out of it.”