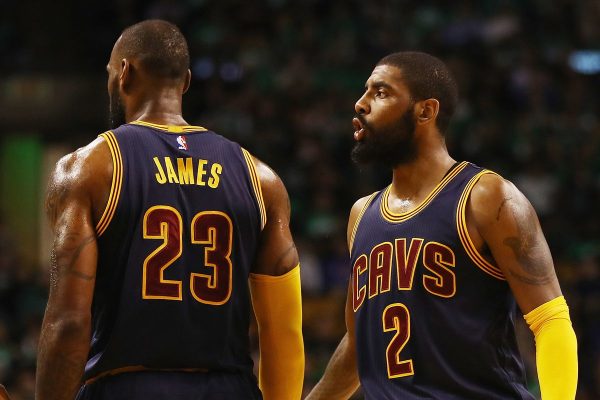 In two consecutive seasons, the Cleveland Cavaliers have had to part ways with generational superstars. While LeBron James bolted to the Los Angeles Lakers via free agency this summer, former guard Kyrie Irving requested a trade last year. Although the franchise-altering moves are in the past, there is still much to be said about the relationship between James and Irving.

Former Cavaliers general manager David Griffin, who spent much time with both players, dished out details regarding their tension, per the Good N’ Plenty w/ Jeff Goodman podcast.

“Kyrie and LeBron didn’t have drama as individuals,” said Griffin. “They could laugh and joke and make fun of each other just like everyone else did on the team. But there was more and more friction in the process in terms of how we go about winning games. It became really evident to Kyrie that he wasn’t going to have the template from which to find out how great he can truly be because he wasn’t going to have the ball enough. And when you’re trying to be point guard who makes everybody better that can be complicated. So I think once we won the championship it became clear to him that maybe he was going to need to do something else. And once I was gone, I think it became clear to him that he probably wanted to execute that plan sooner rather than later.”

There is no doubt Irving wouldn’t have had the chance to show the league how great he could have been next to the world’s best player. However, the results of Irving being with the Boston Celtics haven’t exactly shown much change. In his first year with the legendary franchise, the point guard averaged 24.4 points and 5.1 assists, down from the 25.2 points and 5.8 assists he put up in Cleveland the season before.

James, on the other hand, continued to show his dominance by guiding a rocky Cavaliers team to the NBA Finals for his personal eighth straight season. Without Irving, the four-time MVP put up 27.5 points, 9.1 assists and 8.6 rebounds while playing all 82 games of the season.

If James’ departure to Los Angeles was inevitable all along, it would have been nice to see Irving stay in Cleveland. The crafty dribbler could have stayed with the same team that drafted him and would have easily grabbed the keys to the franchise’s future. Still, Irving remains one of the league’s finest guards and will be an All-Star for years to come.

Now, to see the former teammates battle against each other on two different teams will be special. The historical rivalry between both Lakers and Celtics will have some spice with the 2016 champs leading their teams. Yet, despite whatever tension there is, nothing will trump the storied comeback that was led by James and Irving to spurn the Golden State Warriors and bring Cleveland its first championship.