Why Jose Calderon Has Been Cleveland’s Most Underrated Offseason Signing 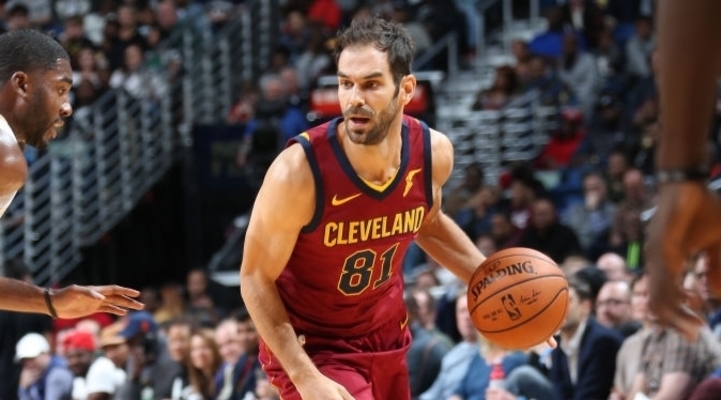 When the Cleveland Cavaliers announced the signing of veteran free agent point guard Jose Calderon back in July, the collective yawn within the basketball world was deafening. That’s because the signing of a 36-year-old point guard to a veteran’s minimum deal was hardly considered breaking news.

Add to that the fact that the Cavaliers would be Calderon’s seventh team in as many seasons and that his offensive numbers had dipped from his peak years. In short, the signing was considered to be an afterthought, even after Kyrie Irving‘s trade request became public.

Such speculation appeared to be accurate during the Cavs’ first 16 games, with Calderon only seeing just over 47 minutes of action and not even playing in nine contests. However, since that time, he’s started all 13 of Cleveland’s games and has helped stabilize a key spot that’s being kept warm until Isaiah Thomas returns to action.

The much more high-profile signing of Derrick Rose was expected to keep things in check until Thomas made it back. However, that plan was short-circuited during the team’s second game of the year, when the oft-injured Rose went down with an ankle injury that he continues to rehabilitate.

In Calderon’s 13 starts, he’s averaging 6.1 points, 2.5 assists and 1.4 steals per game. His shooting percentages, both from the field and long-range, are 53 percent each. More importantly, the Cavaliers have compiled a 12-1 mark after having begun with a 9-7 record prior to Calderon’s elevation to the starting lineup.

During his 13-year career, Calderon has never relied on flashy plays or big numbers to help his teams. What’s helped keep him in the league is a strict adherence to the fundamentals of the game, which includes being able to adapt to whatever his team needs.

Joe Vardon of Cleveland.com noted the following statistic that offers a window into just what he’s been able to give the Cavaliers, in contrast to Rose, a former league MVP:

“Calderon boasts an assist-to-turnover ratio of nearly 4-to-1 over 13 years. He’s only committed 17 miscues in 335 total minutes this season. Rose has 19 in 188 minutes.”

The shooting ability of Calderon has also forced defenses into seeking out different ways to defend against the Cavaliers. Such efforts haven’t had much success, with the team’s sparkling record under his leadership just one aspect of that assessment.

During Calderon’s tenure as a starter, the team has risen to third among the NBA’s 30 teams in effective field-goal percentage and offensive efficiency.

Following Cleveland’s Thursday night win over the Los Angeles Lakers, a game that saw Calderon score a season-high 17 points, Kevin Love indicated exactly why the underrated veteran has been such an asset for the team:

“He’s an oldie but goodie,” Love said. “Whether he’s playing five minutes or 35 minutes, he’s going to be Jose and go out there and knock down shots, play with a lot of poise. He’s been great for us.

“He’s really getting us off to good starts and making big plays, getting us in our sets and being super scrappy, picking up full court on the defensive end. He’s just done a really, really good job for us.”

Focusing on the Big Picture

Despite the success Calderon has enjoyed in this new role, his lack of ego will be important when Thomas does return. That’s because rather than pout or express anger about being displaced after such a solid stretch of play, the veteran will simply return to his role of coming off the bench. His personality simply isn’t programmed to cause havoc in the locker room.

The fact that Calderon’s in a position where his career is winding down and playing for a team that will be challenging for an NBA title will keep him focused on supplementing the work of his Cavaliers teammates. His previous teams have only made four playoff appearances during his 12 seasons, with none making it past the first round.

Expectations may have been low when the Cavaliers signed Calderon, with some speculating that he might not even make the team out of training camp. However, it’s clear after nearly one third of the regular season has passed, he’s more than lived up to the deal he signed, with the Cavaliers and their fans the beneficiaries of his underrated status.