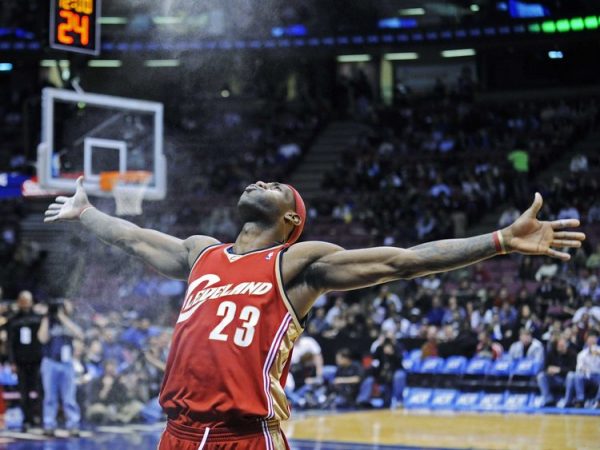 It’s not often that you hear an NBA player mentioned together with the words “wanted by police.” In this case, a student wearing a red-and-white LeBron James Miami Heat jersey was sought by University of Florida police for performing a famous pregame ritual that the All-Star forward used to do.

It was just a prank, however, one that the 6-foot-2 student probably did not realize would become a big issue.

According to the New York Daily News, the student entered a classroom which he was not enrolled in and proceeded to throw baby powder in the air in the same manner that James used to prior to games.

He was also reported to have yelled something similar to what James announced when he left the Cleveland Cavaliers in 2010 to play for the Heat. Infamously known as the “Decision,” the four-time MVP made a live announcement on national TV that he was signing with the Heat.

The accused student made it his own, perhaps in reference to transferring to another school.

He then threw powder from his hands.

Police went on a manhunt for the suspect inside the campus in addition to another person of interest. By 12:30 p.m., the campus was considered safe though students and staff members were still told to avoid the area due to what was later deemed as an anthrax scare.

The UFC police department was gracious enough to apologize to James for dragging his name through social media due to the incident.

James had used the pregame ritual for much of his career. He used to put talcum powder in his hands and toss it in the air to get the crowd pumped up before games.