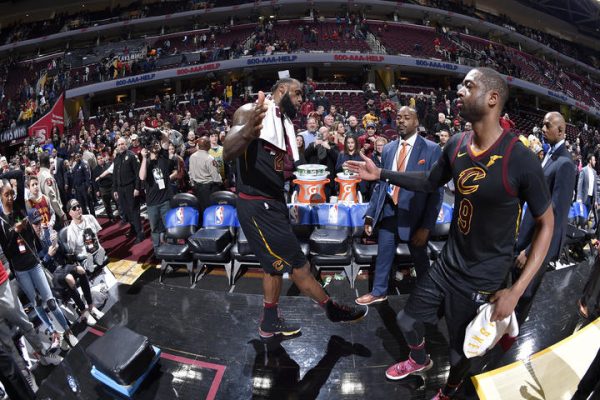 (Cleveland, OH) — LeBron James notched the 59th triple-double of his legendary career and tossed in a pair of clutch baskets down the stretch to help the Cleveland Cavaliers stave off a determined upset bid as they defeated the Los Angeles Lakers by a score of 121-112 at Quicken Loans Arena on Thursday night. The victory marks the team’s third straight win and 16th in their last 17 contests.

James finished the evening with 25 points, 12 rebounds and 12 assists, marking the fourth time this year he’s reached that prestigious category. More importantly, his last six points helped Cleveland hold on after Los Angles had sliced its deficit to just five points at 113-108 with just under four minutes to go in the contest.

Kevin Love quietly picked up another double-double with a game-high 28 points and 11 rebounds, while Jose Calderon contributed 17 points and drilled a game-high five 3-pointers during that effort. Jae Crowder tossed in 11 points, while Kyle Korver and Dwyane Wade each added 10 points apiece. The bulk of Wade’s points came during the crucial fourth quarter.

“He’s (Wade) always big down the stretch,” Cavaliers head coach Tyronn Lue said. “He had to take a game off, so he didn’t have his touch early.”

Wade was asked to explain his ability to turn it on in that final quarter, especially after missing the last game.

“Just rhythm,” Wade said. “I hadn’t done anything since our last game, but by the fourth quarter, I was hitting some big shots. It’s not my first rodeo.”

Lue also spoke about why Calderon has emerged as a key part of the team after a quiet start.

“I think getting consistent minutes and getting more comfortable in the offense,” Lue said. “He was always ready. That’s what true professionals do.”

Another strong area for the Cavs was their assist total, finishing with 32 and breaking the 30-threshold for the second consecutive game. However, the Lakers actually topped that amount with 33 on the night.

“They kept coming at us,” Love said of the Lakers. “At both ends of the court, they offer up a lot of balance. They had a lot of different lineups that they threw at us.”

Slow starts in both of the first two quarters were responsible for the Cavaliers trying to play catch-up for a good portion of that half. Missing 8-of-11 from the field to start the game, they then followed that up by making just 2-of-9 from the field at the outset of the second period.

Part of the reason for the Lakers’ early success was their ability to control the offensive glass, picking up seven boards in that manner to take a 37-28 lead early in the second quarter. Six of those had come in the opening period, which allowed Los Angeles to hold a 9-1 advantage in the second-chance points department.

“They (Lakers) get the ball up the floor quickly,” James said. “They exploited that at different parts of the game.”

Over the remainder of the second quarter, the Cavs outscored the Lakers 35-23 to take a 63-60 lead at intermission. Love’s 3-pointer with 4:25 left in the period had given the Cavaliers the lead back for good at 48-45 after having earlier held a brief advantage.

The resumption of play saw Cleveland twice move out to double-digit leads, but the young Los Angeles squad continually battled back to keep the game competitive at 94-86 with 12 minutes remaining. One of the keys in building that margin was connected to the Cavaliers’ 59 percent shooting from the field, aided by Love’s 13 points during the quarter and the Lakers’ eight turnovers.

“They were finding me a lot in the third quarter, so we took advantage of what they were giving us,” Love said immediately after the game.

The Cavaliers have a busy weekend on tap with a home game on Saturday night against the Utah Jazz. That’s followed one night later by a road battle against the Washington Wizards.