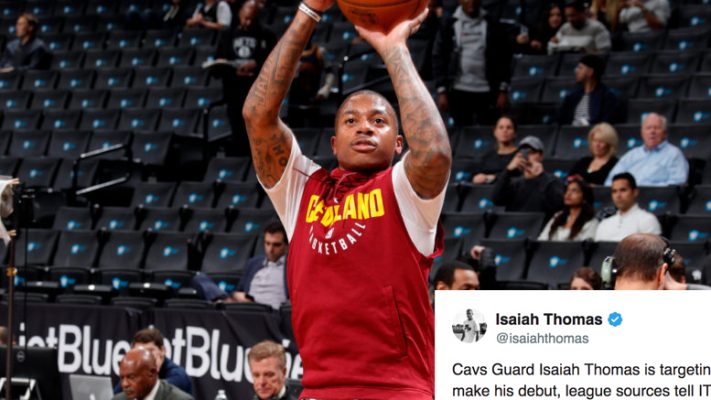 The news regarding Cleveland Cavaliers point guard Isaiah Thomas‘ return to NBA action has been up and down as of late. While reports had indicated that Thomas was set to return by mid-December, it now appears that he won’t be ready to play until early January.

The All-Star point guard has clearly grown tired of the drama surrounding his return from a lingering hip injury. On Monday morning, he decided to poke fun at the constant stream of media rumors by taking to Twitter to make a report of his own.

Cavs Guard Isaiah Thomas is targeting the first week of April to make his debut, league sources tell IT!

Luckily, this is nothing but a joke. It’s clear, though, that if anyone’s ready for the updates on his health to come to an end, it’s Thomas himself.

While Thomas may be growing tired of the attention, it’s hard to blame the Cleveland faithful who have been dreaming about his return to the court ever since he was traded to the Cavs as a part of the blockbuster Kyrie Irving trade.

Fans and teammates alike have been incredibly supportive of Thomas ever since he became a member of the Cavaliers. They are sure to continue supporting their healing star whether he returns in three weeks or three months. For the sake of the team, however, three weeks is certainly preferred.