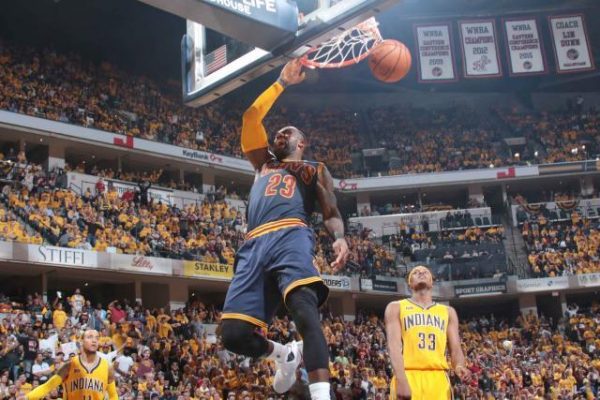 Just when it seems as if there are no more superlatives left to describe the play of LeBron James, along comes a series like the one against the Toronto Raptors to challenge your preconceived notions.

On his way to an astounding seventh consecutive trip to the Eastern Conference Finals, the 32-year-old James is excelling at a clip he never has previously been at in the postseason. Such a statement might sound blasphemous to anyone who remembers his performances in the last three games of last year’s NBA Finals or any number of the scintillating runs throughout his career. But that’s just how amazing he has been as the Cleveland Cavaliers remain unbeaten in the 2017 playoffs.

Here’s the most remarkable statistic of all: James scored a total of 144 points against the Raptors while attempting only 75 field goals. During a four-game sweep of the Indiana Pacers in the first round, James scored 141 points on a total of 92 field-goal attempts. And for another point of comparison, he finished with 208 points over seven games against the Golden State Warriors on 166 shots.

Remember how much of a fuss was made about his struggles from the free-throw line during the regular season? Well, after shooting a career-low 67.4 percent over 74 games, James connected on 45 of his 54 attempts (83.3 percent) in the Eastern Conference semifinals.

In addition, James’ true shooting percentage against the Pacers and Raptors was .663. Only during his final playoff run as a member of the Miami Heat, in the 2014 postseason, did he post a better number in that category (.668). Just as impressively, his player efficiency rating of 31.0 surpasses what he did in the playoffs during his first two years back in Cleveland.

No matter the lineup surrounding him, James has made it a point to get to the rim and finish strong. He has already been fouled 11 times this postseason on field goals which he has made. In 20 playoff games in 2015, that happened to him a total of only 10 times.

And never has he been more accurate from three-point range than he is now, having made 22-of-47 attempts (46.8 percent).

James has not lacked for signature moments when the stakes are at their highest, beginning with his 48-point explosion at Detroit in Game 5 of the 2007 conference finals — a contest in which he accounted for 29 of the Cavs’ final 30 points. In 2012, with the Heat facing elimination at Boston, he torched the Celtics for 45 points and 15 rebounds. Most memorable of all, there were the back-to-back 41-point games a year ago against the Warriors followed by his 27 points, 10 rebounds, 11 assists and one legendary blocked shot in Game 7 of the NBA Finals.

But for sustained excellence, this is on another level. To average 34.4 points on 55.7 percent shooting the past eight games is something which not even Michael Jordan pulled off in his 30s. While Jordan averaged more than 30 points in each of the final three years of the Chicago Bulls’ championship run, he never shot better than 46.2 percent from the floor over that time and never had a player efficiency rating higher than 28.1.

As Brent Musburger said of Larry Bird a generation ago, you are watching what greatness is all about.