Don't Miss
Home / Videos / Video: Cedi Osman Speaks on How He’s Fitting in With Cavs as of Late

Video: Cedi Osman Speaks on How He’s Fitting in With Cavs as of Late 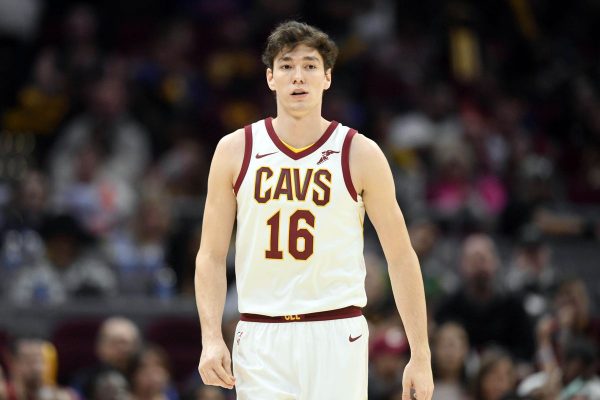 On a Cleveland Cavaliers team that’s dominated with veteran players, rookie Cedi Osman wasn’t expected to have much of an impact this season. However, due to injuries and his own effective play, he’s beginning to show why the Cavaliers worked a draft-night deal in 2015 to acquire his rights.

On Saturday night, Osman scored a career-high 10 points in the Cavs’ 109-100 win over the Utah Jazz. He spoke after the game about how he’s fitting in with the squad:

Osman was then asked about the rarity of a Cavaliers rookie being able to contribute, given the veteran makeup of the roster:

“Yeah, I’m aware and I’m trying to play my best basketball because of that, and I’m aware and I know what’s going on. But the best part is that teammates are trusting me and I’m getting confident by them, so that’s really a good part.”

Asked if the team’s fan base has begun comparing him to the Cavs’ beloved former point guard Matthew Dellavedova, Osman smiled during his response:

“Yeah, I saw a couple tweets about it,” Osman said. “I know that Delly was a really good defender, and as I said, I mean, I’m just trying to be the best defender on this team. I try to bring that energy in trying to stop their best players.”

Osman was the first selection of the second round in 2015 and was taken by the Minnesota Timberwolves. A deal that sent the Cavaliers’ first-round pick that year, Tyus Jones, to the Timberwolves was then worked out. For the next two years, Osman would work on his game by playing professionally in Turkey before he signed a three-year, $8.3 million contract with the Cavaliers last July.