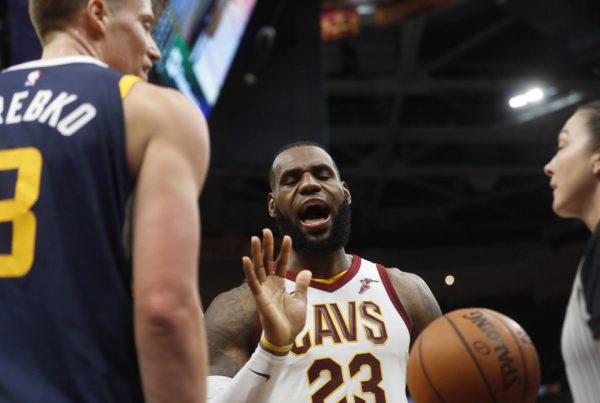 (Cleveland, OH) –The combination of another triple-double from LeBron James and 46 points from the team’s bench helped the Cleveland Cavaliers hold off a competitive Utah Jazz squad by a score of 109-100 at Quicken Loans Arena on Saturday night. The triple-double was the 60th of James’ storied career, passing the legendary Larry Bird on the all-time triple-doubles list. The game also marked a milestone for Cavs head coach Tyronn Lue, who won his 100th game as head coach.

“My mindset is to be a triple threat player every night,” James said. “If that results in a triple-double, or more importantly, if it results in a win, then that’s what I’m all about.”

James’ triple-double of 29 points, 11 rebounds and 10 assists marked his second consecutive in that department and third in the last four games. Meanwhile, the bench perked up after a relatively quiet game on Thursday night by spreading 46 points among six players, including a career-high 10 points from rookie Cedi Osman.

“He was playing well,” Lue said of Osman playing the entire fourth quarter. “It was tough for Channing [Frye] because they went small and the matchup was better.”

Three other Cleveland players broke into double-figures in the scoring column, led by Kevin Love with 15 points and five rebounds. The bench duo of Kyle Korver and Jeff Green ended their evenings with 12 and 11 points respectively.

“In their 15th year, I don’t know if anyone has gone about it this way,” Love said of comparisons to James’ continued MVP-like performance.

The Jazz, who had defeated the Boston Celtics on Friday night. showed no signs of fatigue and managed to stay in the game by using a weapon that has been serving the Cavaliers well of late: the 3-pointer. They knocked down 17 during the game, helping to continually blunt attempts by the Cavs to take control of the contest, while the Cavaliers only hit on 10 in that category.

During the fourth quarter, the Jazz had the opportunity to make it a one-possession game with just over a minute remaining in the game. The Cavs ended that hope, however, with a steal from Osman and a subsequent pair of free throws by James to make it 108-100 in favor of the Cavaliers.

The Jazz scored the first eight points of the game and held a 10-2 advantage by connecting on all four of their shots from the field. They cooled off considerably for the remainder of the half, hitting on just 34 percent of those attempts, though they were prolific on long-range shots, hitting on 9-of-18 during the first two quarters.

More aggressive play by the Cavaliers helped force some bad shots, with seven first-half steals also contributing to the Cavs getting back on track. They managed to take their first lead of the contest on yet another eye-opening dunk by James: a left-handed, one-hand slam off an alley-oop that made it 23-22 with 58.7 seconds left in the opening period.

The Cavs managed to maintain their lead throughout the third quarter, but saw it dip to a single point on multiple occasions. Both teams shot at better than 55 percent from the field during the period, with four more 3-pointers by the Jazz helping to keep them close. Cleveland closed out the quarter with a 10-4 run and held an 80-73 lead with one period left.

“We may all take him for granted, but this guy puts the work in,” Dwyane Wade said about James. “It’s not a surprise he’s great.”

The Cavaliers now immediately head to Washington to play a Wizards team on Sunday that they previously defeated on Nov. 3. In that contest, James broke his own single-game scoring team record by notching 57 points in the 130-122 victory. Lue announced during his postgame press conference that Thompson and Wade will sit out the contest. Tipoff for the Sunday clash will be just after 6 p.m. ET.