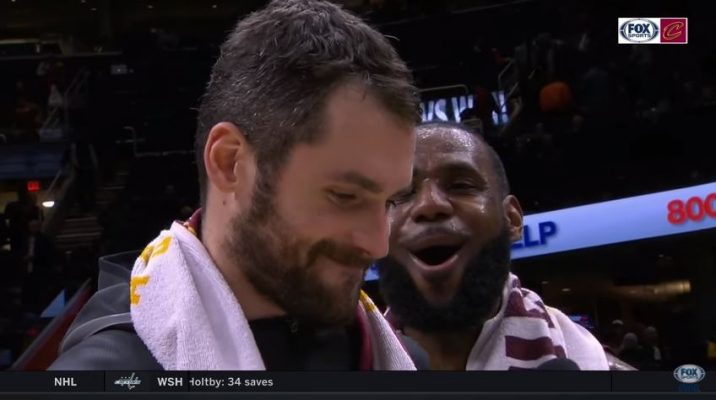 The camaraderie between Cleveland Cavaliers players LeBron James and Kevin Love continues to be a strong one as they move forward in their fourth season together as teammates. When James returned to the Cavaliers in 2014, he strongly urged the team to acquire Love, with one NBA title and three consecutive finals appearances the byproduct of that suggestion.

Following Cleveland’s Thursday night win over the Los Angeles Lakers, both James and Love conducted postgame interviews. James, who collected the 59th triple-double of his career in the victory, concluded his interview first after having stated that Love, who finished with double-double with a game-high 28 points and 11 rebounds, had the better game.

Love jokingly called James a liar in response and indicated that veteran point guard Jose Calderon, who finished with 17 points, actually had the best performance of the night. Roughly a minute into the above video, James then interrupts Love.

Both James and Love have been integral parts of the Cavaliers’ success over the past five weeks, which has seen the team roar back from a 5-7 start to win 16 of their last 17 contests. That surge has been accomplished without the services of two key injured players for the team, center Tristan Thompson and point guard Isaiah Thomas. In addition, injuries have also sidelined guards Iman Shumpert and Derrick Rose for most of that stretch.

The Cavaliers will be back in action this weekend with games on Saturday and Sunday night against the Utah Jazz at home and the Washington Wizards on the road, respectively.