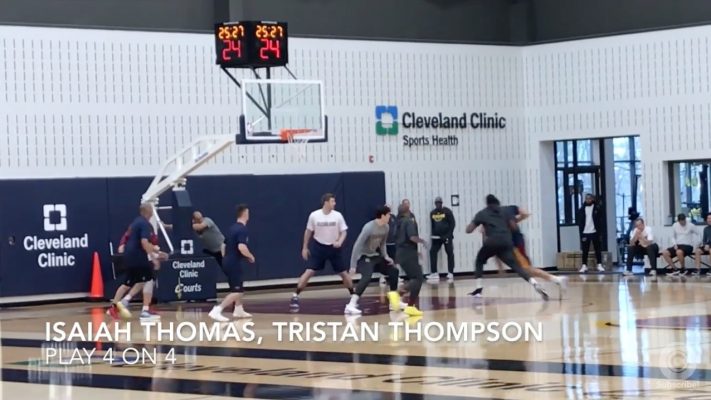 The Cleveland Cavaliers may just be days away from getting two key players back.

On Wednesday, both point guard and Isaiah Thomas and big man Tristan Thompson were seen playing in a 4-on-4 scrimmage at the Cavs’ training facility.

In a video, Thomas and Thompson can be seen going to to the basket and taking shots with confidence. It is an incredibly promising site to see two major contributors getting back to game speed as the surging Cavs look to continue their current 12-game winning streak.

Thompson is expected to make his return this week, and while Thomas was originally expected to be out past the New Year, there have been rumblings that he could be ready to go by mid-December.

While the news of both players’ imminent returns is incredibly exciting, LeBron James reminded the Cleveland faithful that in the end, both players wont take the court until they feel they are ready to go.

“That’s not how we do it around here,” James said. “When guys are healthy and are ready to get back in the lineup, then they’ll be there, but there’s never been no urgency for anyone.”

With the Cavs on the cusp of tying a franchise record 13-game winning streak, it will be interesting to see how Cavs head coach Tyronn Lue eases both players back into his team’s rotation.

After an extremely rocky start, it is once again an exciting time to be a Cavs fan. With just over a quarter of the season behind us, it will be fascinating to see what this team can do with the rest of the 2017-18 campaign.