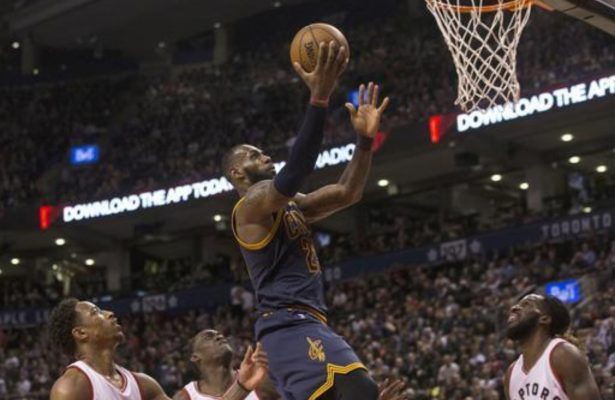 (Toronto, ON) – Holding on against a furious rally in the final two minutes of play, the Cleveland Cavaliers put an end to their three-game losing skid with a 116-112 win over the Toronto Raptors at Air Canada Centre on Monday night.

The Cavaliers led by 12 points with less than two minutes remaining and then by seven points with 31.6 seconds left, but watched the Raptors nearly slice their deficit to two points with 12.3 seconds left. However, DeMar DeRozan was ruled out of bounds on his 3-point shot and the Cavs held on the rest of the way.

“We played hard, we scrapped and we stayed with the game plan,” Cavs head coach Tyronn Lue said after the game.

Prior to that last run, the Toronto offense had been held in check during the second half after scoring 61 during the first two quarters. In addition to getting their defense back in working order, the Cavalier bench helped by contributing 22 points. That support was needed after J.R. Smith suffered a knee injury that knocked him out of the game with 1:52 left in the first quarter.

During that second half, the Cavaliers began by scoring the first six points, then were on the verge of breaking the game open by taking an 85-72 lead with 3:35 left in the quarter. However, a LeBron James missed a layup allowed Toronto to run off seven unanswered points.

The Raptors had a chance to chip away at their deficit even more, but DeAndre Liggins’ three from the right corner stopped the rally and helped the Cavs take an 90-81 lead into the fourth quarter.

“When one of us goes down, someone’s ready to step up,” Liggins said. “That’s my job to stay ready.”

Then, with Cleveland holding a 97-92 lead with 8:40 left in the game, the Cavaliers ran off 10 straight points that turned out to be a valuable cushion during those final moments.

Coupled with the help from the bench, the Cavs’ Big 3 managed to contribute 86 points on the night. James led all scorers with 34 points, adding eight rebounds and seven assists, while Kevin Love contributed a double-double with 28 points and 14 rebounds. Love was especially deadly from long-range, connecting on six 3-pointers. Kyrie Irving tossed in 24 points and added six assists on the evening.

“There were a lot of things that were fixable during the three losses and we were able to do that tonight,” Irving said.

One drastic sign of improvement from the games during the losing streak was Cleveland’s play in the paint. It allowed only 32 points for the evening, with a number of them coming during that final push.

“The biggest thing tonight for us was to protect the paint,” Lue said. “I thought that we did great there.”

Channing Frye led the bench with 10 points, while Richard Jefferson and Liggins added five points apiece. On the rebounding front, Tristan Thompson grabbed 14 rebounds in front of his hometown crowd.

Love was happy with the win, but isn’t content to rest on his performance:

“We felt we got back on track tonight and beat a good team,” Love said. “We just have to watch some film tomorrow and get ready for Wednesday.”

James was especially appreciative of Liggins’ effort after the game:

The Cavaliers complete their three-game road trip with a visit to Madison Square Garden on Wednesday night when they face the New York Knicks. Tipoff for that matchup will be just after 8 p.m. ET.

“I give all the credit to yesterday’s practice. The first time in a long time we really got after it, we actually had a chance to get some practice time in” James said. “It paid dividends in tonight’s win.”