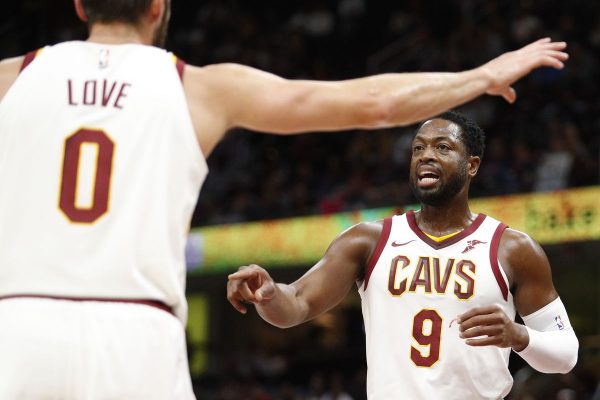 Despite having started 97 percent of his NBA regular season games during his 15-year career, veteran Cleveland Cavaliers guard Dwyane Wade isn’t interested in returning to that status when injured point guard Isaiah Thomas returns to the lineup.

Joe Vardon of Cleveland.com indicated that Wade doesn’t want to tamper with the success that’s led the Cavaliers to 12 consecutive wins and turned around a season that began with seven losses in the first 12 games.

“I’m good where I’m at,” Wade said. “The problem would only be worse when Isaiah comes back, because he’s going to need his shots. Where I am now, it’s working for me and for this team.”

Prior to this season, Wade had started all but 11 of his 915 regular-season contests and began his Cavaliers tenure by starting this season’s first three games. However, at that point, he voluntarily asked to come off the bench and, after a period of adjustment, has thrived in that role.

That success hasn’t escaped the notice of Wade’s teammate and close friend LeBron James, who is already championing him for the league’s Sixth Man award:

“There’s not one situation that he hasn’t been in so it’s a luxury for our team to be able to have him to come off our bench and be able to lead that group,” James said. “The way he’s playing right now, he’s just in a great groove.”

During the last eight games of the Cavs’ 12-game winning streak, the 35-year-old Wade has averaged 15.9 points coming off the bench and has connected at a rate of 54.8 percent from the field.

While some future Hall of Famers might have struggled with that sort of lineup switch, Wade had no problems making the adjustment.

“[The move] became an easier adjustment than anything since I left Miami that I’ve done,” Wade said. “This is the most fun I’ve had in a few years, just enjoying the game.”

The possibility of a move back to the starting lineup once Thomas and Derrick Rose return is possible, with Wade ready to adapt, if necessary.

“Right now I’m playing the role that’s aligned for me to play,” Wade said. “Hopefully it continues. If it changes, then I’ll make another adjustment and try to be the best at that. But right now hopefully it stays this way for me.”

The Cavaliers will look to tie the franchise record for consecutive victories when they go for their 13th straight win against the Sacramento Kings at home on Wednesday night.